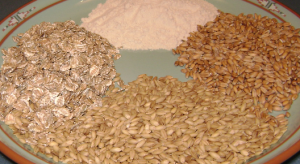 Gluten and ailments related to gluten such as celiac disease and gluten sensitivity have received a lot of press over recent years. It seems that more and more people are experiencing some sort of adverse reaction to gluten. Symptoms vary from mild to severe and may include various digestive issues, breathing issues, skin irritation, joint pain, and lethargy.

Recently I’ve been experimenting with getting the gluten out of my diet.  I believe cutting gluten gluten has played a strong role in reducing in my various aches and pains, particularly my Achilles and heel pain. Are You Too Sensitive? is a recent article in Outside Magazine that provides some anecdotal evidence to support my observations.

As I mentioned at the start, gluten seems to cause some degree of distress and inflammation in a good number of people. This may not rise to the level of severe illness but it may be perceived as a threat by the nervous system. So now we’ve got dietary stress. Let’s add that to any number of the other stresses we have including job stress, money stress, or even the normally good stress of exercise. Maybe we’re not sleeping all that well–oh and our seasonal allergies are getting to us.  At some point all this stress builds and the nervous system senses a building threat. We’ve got a threshold below which we don’t feel pain. Once our stress hits that threshold, things change. The nervous system which is always looking out for our best interest (survival) wants us to reduce this threat level. The result may be pain–an action signal–that will alert you to reduce your stress. And what better way to get our attention than via a nice efficient pathway such as our old back pain, knee pain or foot pain?

And gluten is everywhere! Bread, pasta, anything with malt or barley like beer, pancakes, pastries…  Gluten is often found in sauces, ketchup, marinades, soy sauce and ice cream.  It’s often found in processed meat.  (Have a look here for a big long list of gluten-containing products.) So we’re swimming in gluten.  While this stuff may not be so bad in small amounts, if we’re constantly consuming it then it may build to a toxic level. This chronically elevated gluten may well then contribute to chronic pain.

In addition to reducing my heel and Achilles pain, I believe getting the gluten out has helped me recover after tough workouts and bike rides.  I noticed this maybe a week or so after eliminating gluten.  Typically it was easy for me to either lift, ride or run to the point that I’d be sore to some degree for a couple of days.  The result was my next workout would be inhibited. Now I can say with certainty that I’m simply not as sore as I used to be.  This observation is echoed in the Outside Magazine article:

“That’s old news to Robby Ketchell, the director of sports science for the Garmin-Cervélo pro cycling team. Since 2008, riders have experienced improved post-ride recoveries, which Ketchell attributes to the team’s gluten-free diet. ‘When our guys ride, they’re tearing muscle fibers, and that creates inflammation in their bodies,’ says Ketchell. ‘We need to get rid of that inflammation so they can ride strong the next day. The last thing we want is something that causes more inflammation.'”

So if you’re struggling with chronic pain and you’ve tried many methods to address it, addressing your nutrition–and particularly your consumption of gluten–may be a way to move forward.