“Runners who continue running when they are exhausted unknowingly change their running form, which could be related to an increased risk for injury.”

Runners get injured.  I’m a runner and I’ve been injured–a lot. If you’re a runner then you either have been, are or are going to be injured. According to one source, 60-65% of all runners are injured during an average year (by definition, an ‘injury’ is a physical problem severe enough to force a reduction in training).

If you’ve encountered a running injury then you probably know that it’s rarely a simple solution to fix what ails you.  From shoe changes to barefoot running to stretching to foam rolling to foot strengthening exercises, to physical therapy to acupuncture to chiropractic to massage and on and on… This is a huge hassle and it would be wonderful to avoid this kind of aggravation!  So with some particle of optimism, I present an article from Science Daily that may help us avoid injury: When to End a Run to Avoid Injury: Runners Change Form When Running Exhausted.

The article discusses a study from Indiana University published in the Journal of Biomechanics in November 2010.  Researchers observed that subjects demonstrated biomechanical changes as they fatigued during a run.  Runners tended to display excessive motion at the hips, knees and ankles.

The study had subjects run on treadmills until they either reached 85 percent of the subject’s heart rate maximum or a score of 17 (out of 20) on the rating of perceived exertion (RPE). By the end of their runs, all of the runners reported an RPE of at least 15 — studies have shown that RPEs between 13-15 indicate fatigue.  Here’s what you need to pay attention to.  The article states, “Runners’ RPEs could provide some answers, with RPEs of 15-17 indicating runners’ have reached a point where their mechanics have likely begun to change in an undesirable way.”

The RPE scale is shown below. 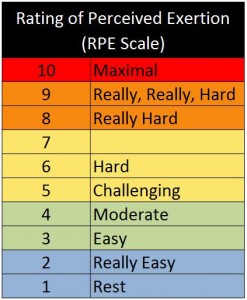 What does this mean to you the runner?  Don’t run to the point of exhaustion.  Stop when you’re feeling good and strong, not when you feel beaten to hunched-over death.

I’m going to go out on a limb and suggest that we might take this advice for any type of exercise: lifting weights, cycling, martial arts–whatever.  This isn’t to say we should avoid tough workouts but most of our workouts should be comfortably challenging, not torture.  (I’ve mentioned this concept in previous posts; look here and here.)

Facial expressions can be very useful in gauging our exertion levels.  When I’m working with clients I watch their faces.  When a grimace starts to show we stop the set.  The “scary face” is a transmission from one human to the other humans that something isn’t going all that well.  (Next time you’re in the gym, have a look around and see how many people have a look on their face like they’re being stabbed.  Don’t be that person.) It means we’re butting up against certain physiological limitations.  If we spend enough time doing this we’ll likely end up in some type of pain.  Heed your body’s warnings and you can stop injuries before they start.