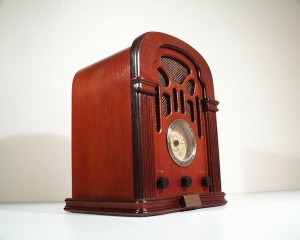 Four laps around this radio equals a mile.

Many of us listen to music while we exercise.  (Some of us even proceed to sing and dance too.)  Do you think it makes you stronger?  Faster?  Is it easier for you to grind through your workout with music?  The New York Times Health Section tells us more about why we like music and how it affects our performance.

The Times piece describes research done at Research Institute for Sport and Exercise Sciences in Liverpool, England.  Twelve male cyclists listened to music set to three different tempos.  Popular music was played either at the regular tempo, increased by 10 percent, or decreased by 10 percent.  Researchers tracked heart rate, power output, pedal cadence, enjoyment of the music and perception of exertion.

Participants rode faster, produced more power, had higher heart rates and enjoyed the faster music more.  In contrast, slower music brought on slowe rides, less power, lower heart rates and less enjoyment of the music which stayed the same.  Interestingly, participants perception of their effort didn’t drop with the increased music but rather it went up.  Seems the music motivated them to ride harder.

There may be an upper limit to the effect of music on our performance though.  Research shows the following:

“While running on a treadmill at 85% of aerobic capacity (VO2max), listening to music will not make the task seem easier in terms of information that the muscles and vital organs send the brain. Nevertheless, the runner is likely to find the experience more pleasurable. The bottom line is that during a hard session, music has limited power to influence what the athlete feels, but it does have considerable leverage on how the athlete feels.”

What we’ve got here is a nice thorough intermingling of auditory input, psychological motivation, and physiological performance.  It’s fascinating that though we may very much feel the effect of exhaustive work, we can through music actually perceive the work differently.  Does anyone still think there’s some sort of difference between the “body” and the “mind?”