The Ragnar Trail Relay came to Aspen, CO last weekend. I ran the race with seven other people, mostly from my wife’s company. We were the Kenzan Running Club. This was my first Ragnar. It was unique among the races I’ve run. I like to recall specific moments after events like this and reflect on what I saw and felt. Experiences like this are the highlights of my life. The memories and emotions are important.

Most teams were eight-person teams like us. The race consisted of three loops: the green easy loop, yellow medium-difficulty loop, red hard loop. We all ran all loops once. I ran first (green), ninth (red), and 17th (yellow.) We were finished when runner eight crossed the finish line. 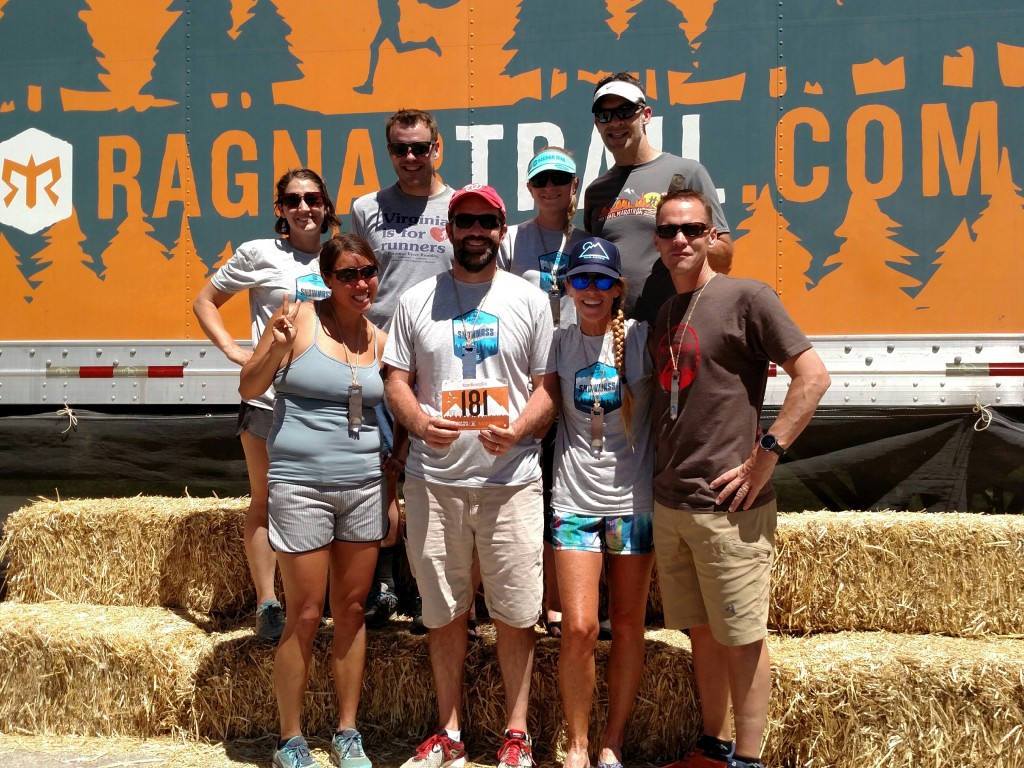 My wife and I camped out the night before the race. It was COLD that night. There was frost on the ground and tents in the morning. We slept well. Sleep was limited from there on out. It also didn’t stay cold.

Fortunately for us, some other teammates got to the camp site early and grabbed a prime spot. We were close to the toilets and the transition area. A word to the wise: If you do this race, get there early. Very early.

Teams were put into flights with the slower teams starting earlier and faster teams starting later so everyone would finish within a certain window. Flights left every half-hour starting at 10 am. We started at 1 pm. I was the first runner. The first loop was very warm, high 70s. No shade. Heat throbbed off of the parched trail. The temperature climbed.

The challenge in an endurance event is to take a very hard effort and spread it out over the entire course of a race. Every runner has started out too fast and paid the price at some point later in the race. That’s not good. At the same time though, you don’t want to finish thinking, “I could’ve run harder.” Another wrinkle was the fact that the race required us to run again and then again.

A few people passed me. Whenever I’m passed, I listen to their breathing and I watch how they move. Do they run strong and relaxed or brittle and tense? If it’s the latter of those two, then I know I’ll probably catch them sooner or later. I like passing people. I don’t win trophies and I’m not a top runner, but I truly enjoy beating other runners to the finish line, especially if I did it by running smart.

My mantra was, “Just don’t blow up.” That meant run my race, not someone else’s. Don’t give in to the urge to charge ahead early just to catch someone. If someone passes you, let them. Be patient. Wait until the end is near to hit the gas. 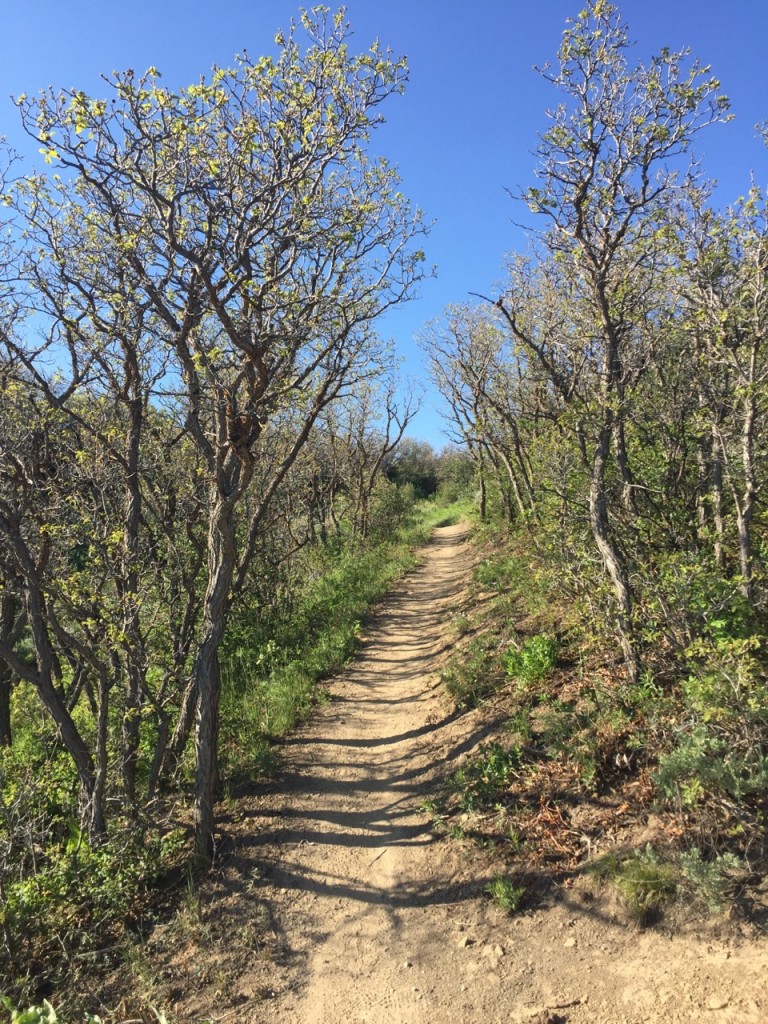 The most shade anyone would see on the trail.

My coach made the analogy of holding on to an electric wire, the type used to keep cows away from the fence. You can hold on for a little while but you can’t hang on to that thing forever. If you grab ahold too tightly, too early, you’re cooked. You blow up which means you screwed up. The blow-up/electric wire paradigm played on a loop in my head throughout the race.

I was very pleased with my conditioning and performance. I was never overly sore and none of my joints hurt. I was especially happy with my downhill running as I had to do a lot of it in the dark on very tired legs. I never crashed or flew off the mountain into space.

The organization and execution of the race was impressive. From what I can tell, the Ragnar race is a complex thing with a lot of moving parts. Everything seemed to operate smoothly. I didn’t detect any crises or surprises on the part of the staff.

Parking for team vehicles and shuttles to other parking areas worked very well. I was very grateful to see well-marked trails, especially at night. The workers were organized and helpful. The campground was crowded but very adequate. There was plenty of water available and food for purchase if you wanted/needed any beyond what you brought—and there were free ice cream sandwiches!

Now this is really important: The port-o-potty situation was excellent! The effort and efficiency in maintaining and cleaning those things was phenomenal! Thousands of people using those things over and over, round the clock—especially in the heat!—was a true marvel. What a relief to have access to mostly clean, well stocked toilet facilities. Don’t think I’m joking. This is a huge thing. 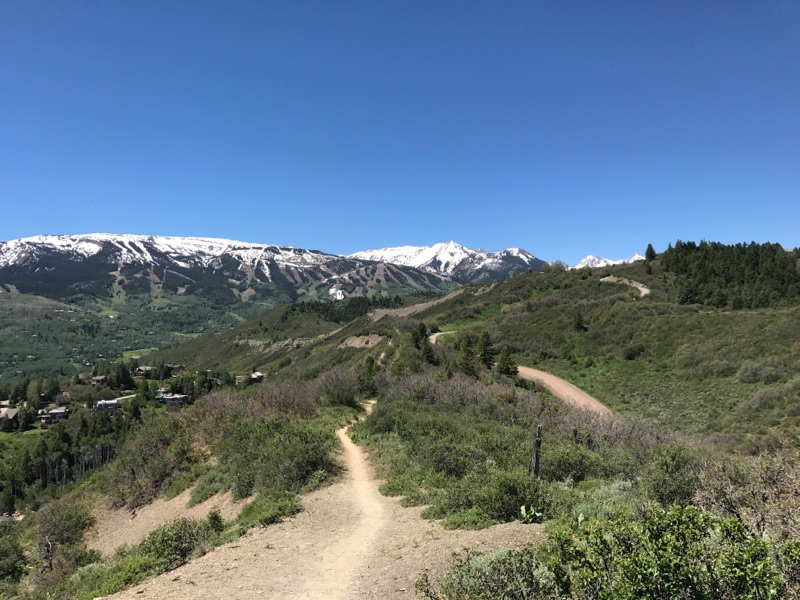 Epic view of Snowmass ski resort and from the red loop. This is why we do this.

Our team was a very compatible group of people. We got along very well, had a lot of laughs and were very comfortable around each other. Everyone was well-prepared. We happily shared space, food, equipment, and encouragement.

To expand beyond our team, my impression of all the Ragnar competitors was very positive. I didn’t see any drama or dumb behavior. I saw no meltdowns, freak-outs, arguments, or fights. I did see a lot of courtesy, encouragement, and the always appealing magic energy that is shared among people suffering together. We passed each other and were passed while exchanging kind words. The camp site was somewhat crowded but we all made do and lived comfortably together. The trail running community tends to be a laid-back, respectful group.

Managing rest was a challenge. We made constant efforts to avoid sunburn and drink lots of water. Staying off my our feet was a priority. We all spent a lot of time chasing shade as the sun passed over us from east to west. We were already spending a lot of time in the sun and any time spent in the cool shade was essential to feeling human. Lying in the grass under trees was heavenly and refreshing.

The Red Loop & the Fajita Lesson

The world isn’t perfect and neither was my race. Here’s the story:

There was a complimentary dinner Friday evening between my first and second runs. I had two thoughts:

Thus I ate a pretty big plate of chicken fajitas, onions, peppers, tortillas, guacamole and cheese. The magnitude of my gamble might seem obvious to you right now. It’s obvious to me now but due to some sort of faulty psychology, I thought my decision was reasonable. And it was hot…

Fast forward 2-ish hours. I felt okay and I continued to feel well enough during the long, steady, climb at the front of the 6.7-ish mile red route. I started at 8:10 pm. Twilight was coming on. I didn’t need the lights yet but I would soon. (More on night running in a moment.) 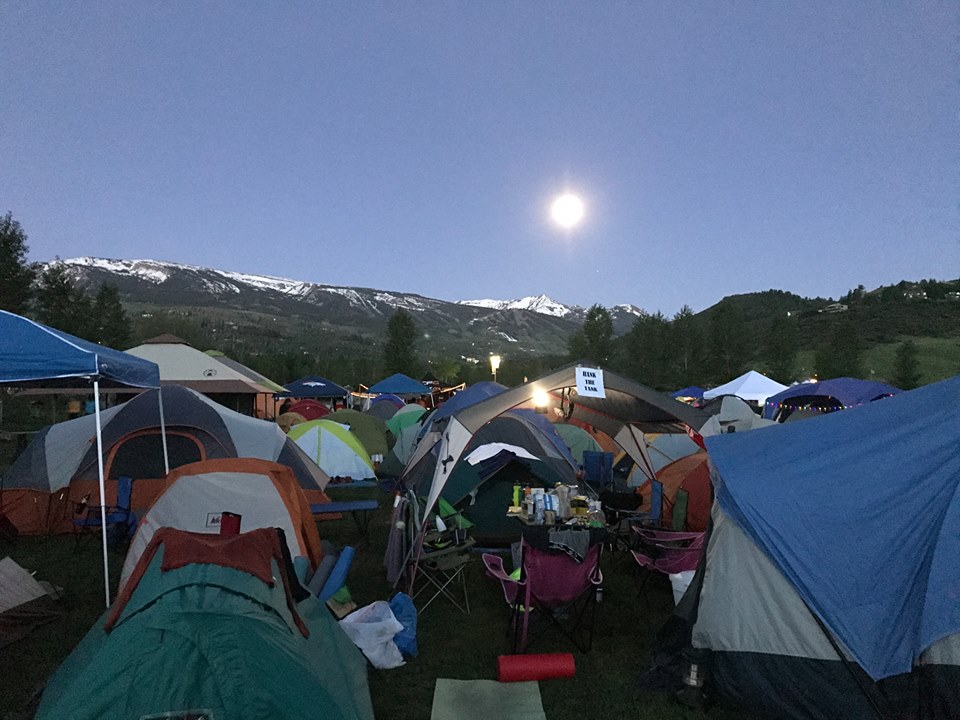 Fast forward a little further and it was time for a 2 mile, high-speed nighttime downhill dash over fast, swoopy terrain. There was jostling and sloshing. My digestive system lodged a prolonged protest. I knew this race would be tough and I welcomed the challenge. I didn’t welcome this. I began to fantasize about those port-o-johns. I thought my teammates might have to hose me off at the finish. By some combination of force-of-will and supernatural providence, I was saved. No hose down needed. That’s enough about that.

This was a new thing for me and I enjoyed it tremendously. During my second run, the red loop, the hardest run of the race, I saw day turn to night. To my left, as I ran along the high ridge line I watched the pink sunset fade to black. On my right, a massively swollen blob of a moon rose and dominated the sky. I don’t see that happen every day. It was a stunning sight and a unique experience. (I took a pic while high up on the ridge line but it was no good. You’ll have to settle for the one up above which was taken after my 2nd loop at about 4 am. That’s not the sun.) 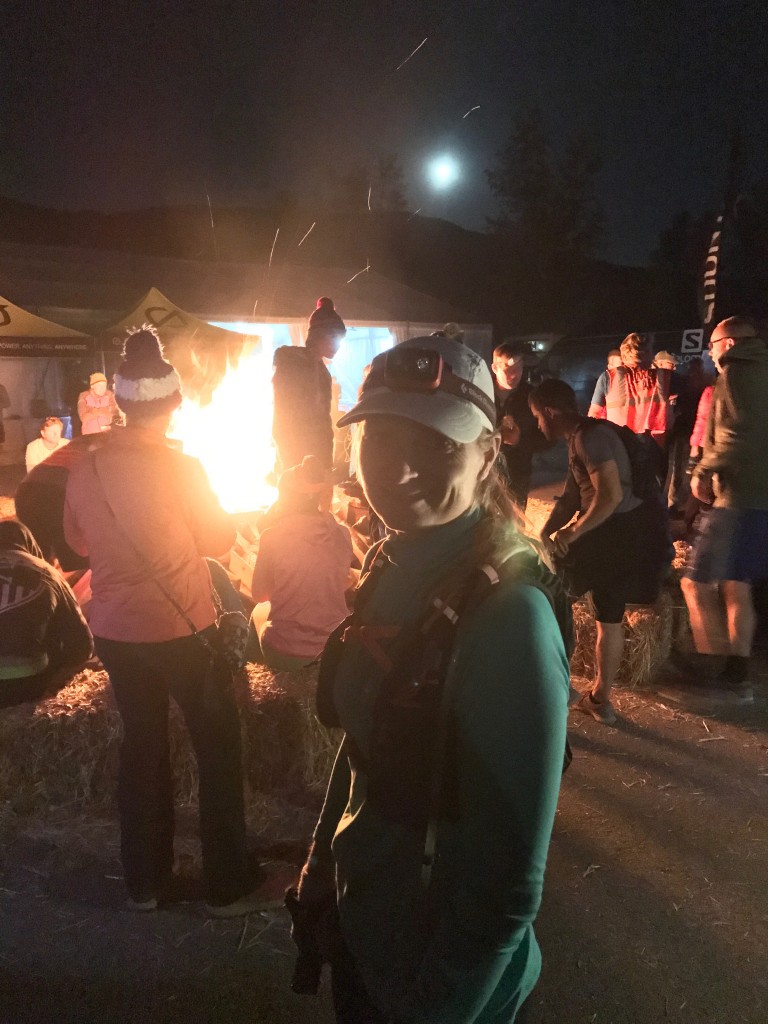 My wife, ready to march into the night.

The early nighttime atmosphere was electric. There transition area buzzed with powerful energy. Music blared and thumped. A bonfire blazed. Everyone had on their nighttime running gear. We all looked like we were about to do battle with the Cylons, Klingons, and/or the Decepticons. We were sharp, confident, and energized. This was all happening before the wee hours, before the music got turned down so we could grab a few moments of sleep, before the deep fatigue set in and we were zombified.

Looking up at the mountainside from camp we saw the continuous trickle of bobbing little lights. Those were runners descending from the red and yellow loops back to the start/finish area. I wish I had a picture of that for you.

My final run started around 4 am and ended about 40 minutes later. For me, anything before 5 am isn’t morning—it’s night. This was far outside my experience. I had maybe three hours of sleep before the final leg but I felt OK. It wasn’t as cold as the prior night which was good. This was the yellow loop, or the middle-difficulty loop. I was grateful that the red loop wasn’t my last loop and I was very happy to avoid more exposure to the heat. Runner number eight came through and I was off.

The climbs were tough on the last two loops but the descents proved difficult both from the the fact that it was night and that my legs were very tired. The challenge was to descend as fast as possible without the legs collapsing and careening down the mountainside.

I like descending. There is a focus that’s required to run fast down a mountain. It puts one very much in the moment. It’s meditative. It’s not like sitting in rush-hour traffic. I passed a lot of people and only one person passed me. He was moving much faster than I.

Our final runner came in several hours later, between 11 and noon. A couple of our team fell and got skinned up a little but no one had any major injuries or issues. The race finished at 6 pm. We were grateful to be through before that. 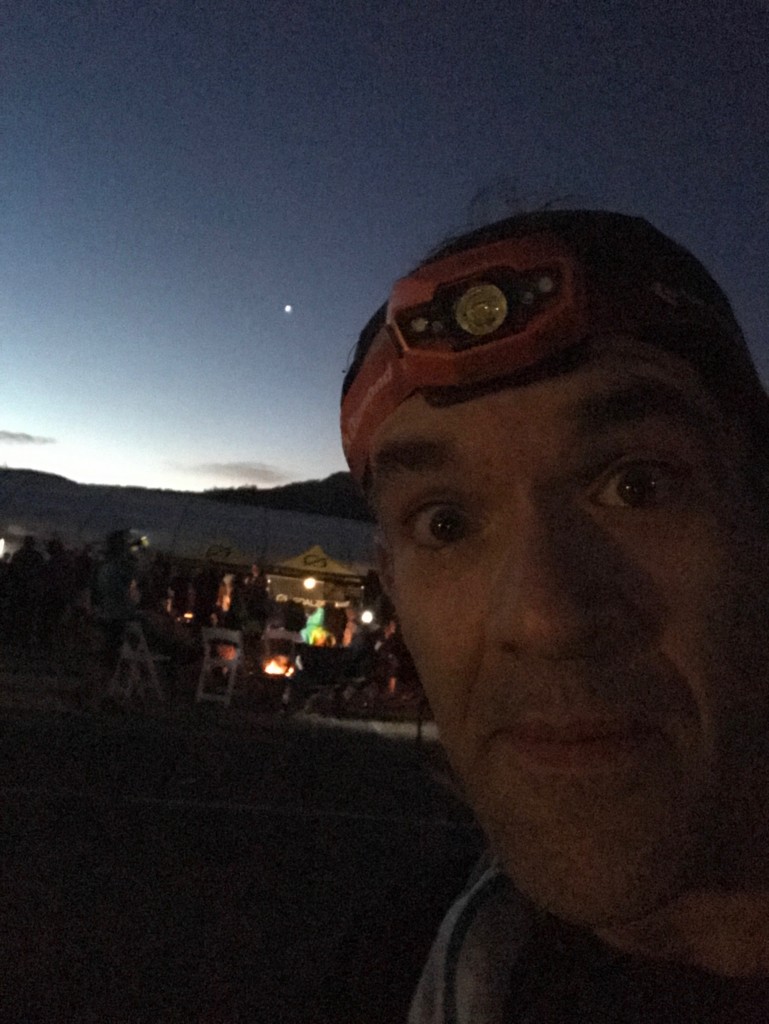 Finished before the sunrise.

The trails for this race were not very technical at all. They were smooth and relatively free of rocks and roots. Compared to most of the Denver-area trails on which I trained, these were sidewalks. That was probably a good thing for night running.

My lights were the Black Diamond ReVolt headlamp and the Nathan Zephyr Fire 300 flashlight. A lot of people ran only with a headlamp, but several articles I read about night trail running suggested a headlamp and a handheld light. I liked having both. I could see both the trail at my feet and further down the trail.

If I had it to do over, I would’ve brought a little less gear with me on the red loop. I brought more than I needed to drink and a winter hat and gloves that I didn’t need.

I might’ve also done a night run during training, just to get feel for the lights. I don’t think I missed without a night run though.

For anyone thinking of doing this race I strongly suggest you familiarize yourself with trail running. This was very challenging. I wouldn’t recommend it for a green beginner. That said, it wasn’t overly brutal. It was very doable. The vast majority of us were very mortal.

That’s most of my story. Our stats are below. Follow this link for a look at all the teams’ stats. I think we did well. Several of us want to do it again.