In Part I discussed Non-Exercise Activity Thermogenesis (NEAT).  The biochemistry of hunger and the possible benefits of hunger were the issues in Part II.  I ended by posing the question of whether or not consuming several small meals per day was more or less conducive to losing weight than the popular admonition to eat up to six small meals per day.  It seems the verdict is very much out.  The answer is: It depends…

To start with, here’s an article by registered dietitian Kristine Clark writing for the IDEA Health & Fitness Association.  Clark first offers wise observations on the exact nature of hunger and satiety.  Hunger being the main reason we should eat at all and satiety being the signal to stop.  She writes,

“‘Unfortunately, many people are out of touch with the feeling of satiety.”  Marion Nestle—researcher, author and professor of nutrition at New York University—says, ‘You can’t teach satiety.  People have to learn it themselves.’  The bottom line is that recognition of both hunger and satiety is key to appropriate eating.

Anyone seeking weight loss must take that statement to heart.

Clark then refers to the research from the 1960s and ’70s that associated several small meals with a leaner physique.  I won’t go into the details of the studies (references are found at the end of Clark’s article) but both studies show weaknesses worth considering.  The small sample sizes and the use of a 24-hr diet recall interview in one study make me question to what degree we should hold to the implications of these studies.  I’m not the only one thinking this.  For further reading on the strength or lack thereof of nutritional studies, look here and here.  (And remember these sorts of weaknesses the next time a news anchor tells you that some study shows This causes That. Odds are the cause and effect aren’t that strongly linked.)

Most importantly, Clark interviews Dr. Barbara Rolls of the Penn St. Nutritional Science Department.  Essentially she says that meal frequency isn’t the key issue–It’s how much you eat!

“As long as people hold their calorie intake constant—as long as they eat less than what they normally eat, whether in six or three increments —they will lose weight, regardless of the frequency.”
– Barbara Rolls, PhD

So it should be obvious.  The key issue is energy intake vs. energy expenditure.  This is no revelation.  Whether it’s three, four, five or six meals per day, if we eat too much then we get fat.  (I’ll add my own opinion to this equation and say that the quality and the nature of our food–real food vs. food-like substances–is of tremendous importance to physique goals as well.)

I’m surprised by the fairly weak correlation between the several-small-meals strategy and successful weight loss.  I’ve been saying this to clients as if it were a settled subject.  I will say though I believe the first time I ever heard the suggestion to eat many times throughout the day was as advice to bodybuilders who were trying to gain weight, not lose it.  Bodybuilders need the raw materials to add body mass so loading up on food several times a day is about the only way to do it.  In contrast, the general public doesn’t have that need, and it stands to reason that by many among us may easily eat too much if we’re eating up to six times a day. 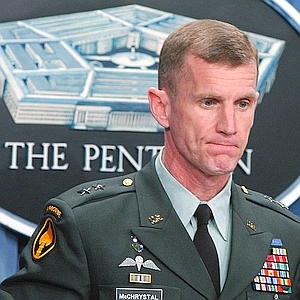 No second helping for me, thanks.

Finally, I didn’t know exactly where to put this, but General Stanley McChrystal, the current commander of U.S. forces in Afghanistan, eats one meal per day!  This man is a dedicated runner with a Special Forces background.  One meal per day…