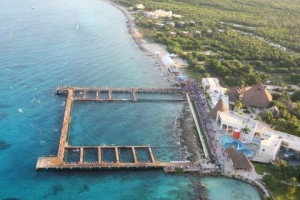 Dolphins are in that pin, probably content to skip the bike and run.

This is my first post since returning a little over a week ago from Cozumel.  We went from temperatures in the mid-80s with high humidity to highs in the single digits and wind chills in the negative double-digits.  Quite a contrast.  No mosquitos in Denver though, and the skiing is better.

The main reason my wife and I were there was a very generous invitation from Mike, a friend and former client from Virginia.  He was competing in the Cozumel Ironman Triathlon.  It was a fascinating experience and the ability of anyone to complete such a race (2.4 mi. open ocean swim/112 mi. bike/26.2 mi. run) is astonishing.  Mike finished 32nd out of 100 in his age group and 135 overall out of nearly 2000 competitors.  That’s a tremendous performance in a grueling race.  It was hot, humid and about 1/3 of the bike course was into a stiff headwind.

The race is on!

There were competitors from all over the world.  The local crowd support was very enthusiastic.  I figure a race like this might be an interesting change from the typical staggering visits by drunken cruise line passengers.  Much thanks to Mike, his girlfriend, and their families who were there as well.  Here’s an excerpt from Mike’s race report:

“That Ironman is the most recognizable name in triathlon is no accident – the lead up to the start was nothing short of spectacular.  The dolphins in the enclosures at the swim start were all performing various jumps, a helicopter raced in low and fast over the pier, and the music and emotions were amped up.  The pros went first – down the pier and off the edge for the in-water start.  It was easy to be envious both of their 15 minute head start and the fact that there were only 50 of them.  At 7am, the other 1900 of us would all be in the same water, all swimming for the same buoy, all at the same time.  Not for the faint of heart.  I was able to position myself about two or three rows back once in the water, almost centered on the buoy.  It was the first time we tested the current, as we had to swim in

place as the rest of the competitors made their way into the water.”

Aside from the big race, my wife and I got in some scuba diving and a healthy intake of margaritas, pina coladas and beer.  The house where we all stayed was right on top of the edge of a reef so we could literally jump right into the Caribbean Sea at our leisure.  Dunk your head under the water and there was a wide and varied crowd of fish, coral, sea urchins and other underwater creatures.  Good livin’…

All in a day's work. Bravo. 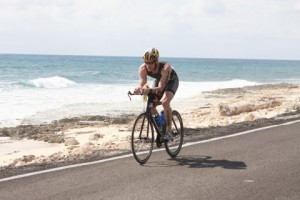 No crowd support out here.