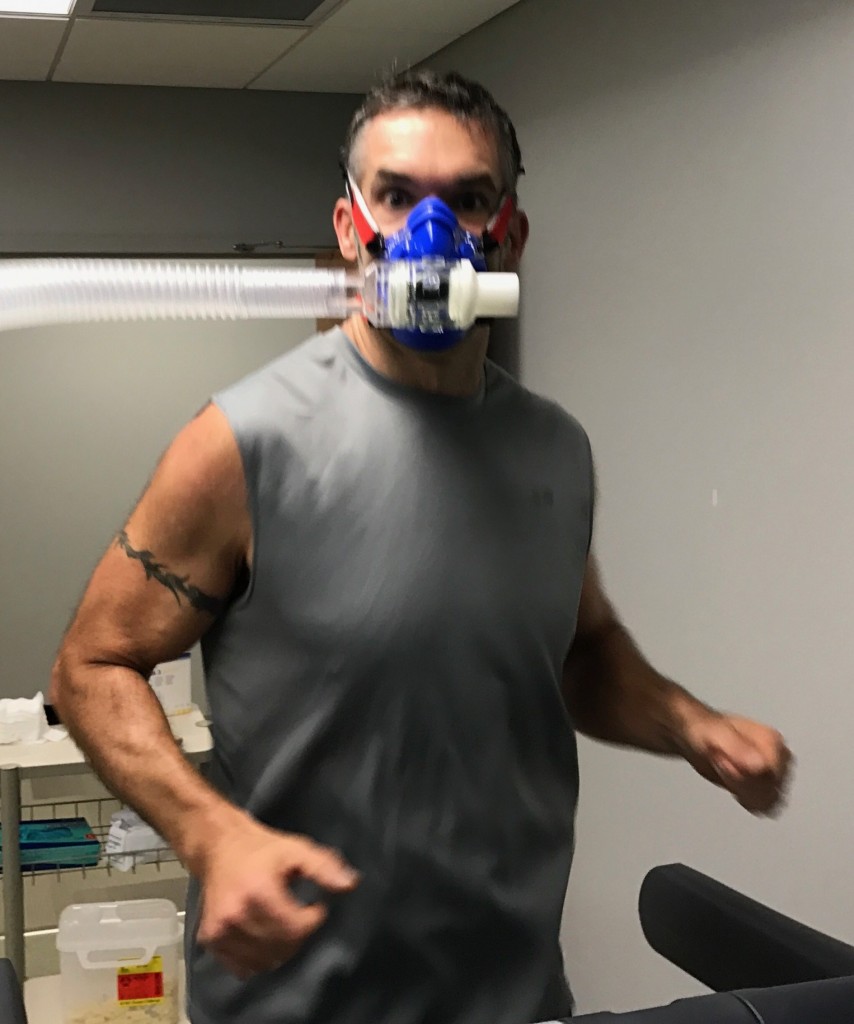 Doing my best Bane impersonation. Might be good for Halloween.

I’m currently training for some road and trail races. Part of that training process is running at different paces to elicit various training effects. Those paces are built around such factors as the aerobic threshold and the lactate or anaerobic threshold. (The definition of those terms are beyond the scope of this blog post. To understand them I suggest you read this from endurance coach Joel Friel.)

Up to this point I’ve used pre-made running plans such as the Run Less, Run Faster and the Hanson’s Marathon and Half-Marathon Method. Those books prescribe paces based on 5k and 10k race finish times. From those race times it’s possible to

The Batman villain Bane. I don’t know what his VO2 max is.

predict race finish times of distances up to the half marathon and marathon. Along with race finish times, training paces for speed, tempo, and long distance runs are also derived. I’ve discovered

those training paces, particularly tempo run paces, are too fast for me. Rather than blunder around trying to solve the problem by myself, I sought help.

A few days ago I visited the sports performance lab at the Colorado University Anschutz Health & Wellness Center in Denver. I underwent the sport metabolism assessment. The test started with a 12-minute warm-up on a treadmill that went from walking to jogging to slow running and running up to a 9:10/mile pace. That was followed by a five-minute rest. (The test conductor explained the whys and hows of the warm-up and rest period. I won’t go into all the information but now I use that process before all my runs. Essentially it enables me to perform better.)

The fun began after the rest period. I ran in two minute intervals. Speed was increased after every two minutes. This process was repeated until I was nearly blue in the face and I couldn’t run anymore. It took about 12 or 14 minutes to hit my limit.

As you see in the pictures, I wore a mask connected by a tube to 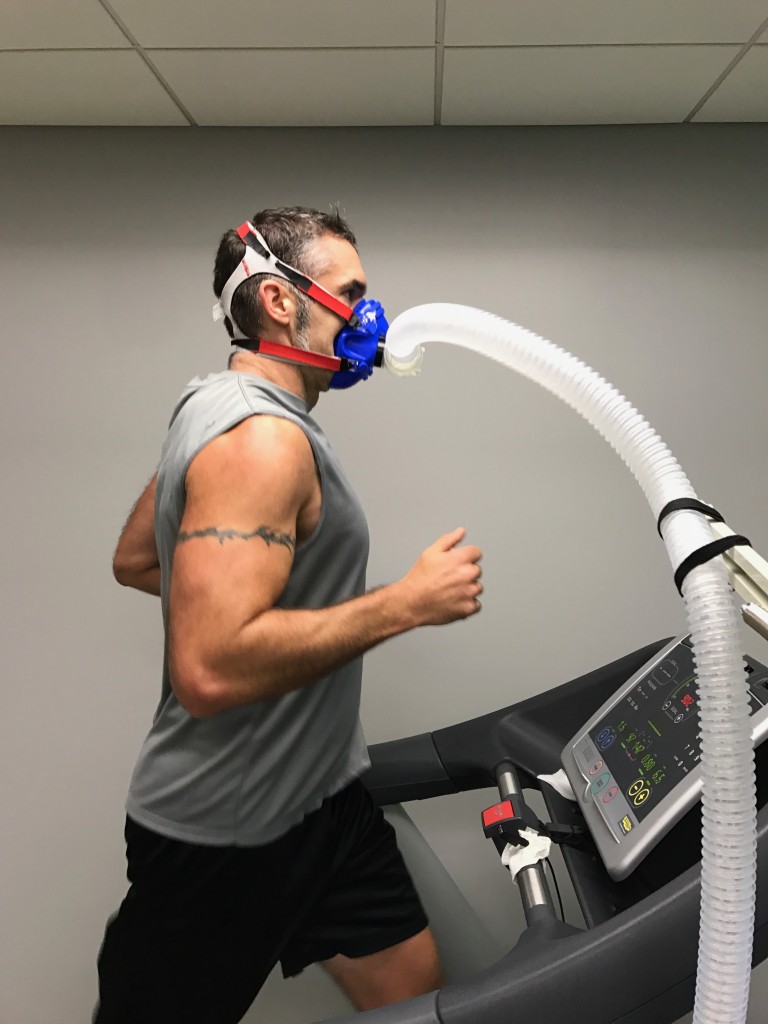 a computer. The computer measured my O2 intake and CO2 expiration. This gas analysis allowed us to see at what paces my aerobic and anaerobic thresholds exist.

Not only did we analyze my breathing, but we also analyzed my blood via a finger prick delivered near the end of each two minute stage. I can’t tell you what joy it is to combine bleeding with intense running…

(For cycling performance testing, the same test is done on a type of stationary bike.)

What did I learn?

I NEED TO SLOOOOW DOWN.

From my speed workouts to my tempo runs to my long runs I should run slower. Running faster isn’t just about running faster — and I knew that! Countless running articles and books preach the idea and I thought I had it figured but I was wrong. The big points and the factors that need improving are these:

My AT occurs at a 7:45 pace. I should be able to maintain that pace potentially for a full marathon. But right now, when I hit my AT I crap out quick! I need to gradually nudge my ability along. If I run at or over my AT (which I have been doing) then I overwhelm my ability to function at that pace. So now my tempo runs are 9:10/mile.

This is speed work and this is where I will improve my VO2 or my ability to utilize oxygen. The pace for this work is 8:40/mile. I had been running my speed work at about 8:00/mile.

First, the idea that I can get my tempo/race pace down to 7:45/mile is fairly exciting to me. It means I might be able to hit a 3:30 marathon! That’s a powerful motivator for me. All the slow miles I’ll need to put in won’t be done aimlessly.

I’ve said it for the past few years and I’m saying it again: I need to work with a coach. I’m a certified running coach but it’s not something I practice much. As the saying goes, “The lawyer who represents himself in court has a fool for a client.” I need an objective set of eyes on me. A good coach can adjust my training schedule where a book or a pre-made running plan cant. It makes sense to work with someone who coaches runners on a regular basis. I am considering several resources: