Previously I discussed how wearing shoes alters the human running stride.  For millennia, our feet functioned well enough to get us to the 1970s when we put them into running shoes.  The result seems to be our adopting a running stride (heel strike) that may be more stressful and injurious than an unshod stride (forefoot strike).  I want to continue the discussion by looking at a few more studies of our feet and the effect of shoes. 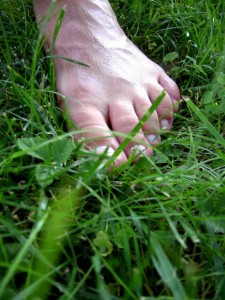 I’ll go back to a Science Daily article from November of 2007 called Your Knees Want to Take you Shoe Shopping.  The research was originally presented in 2007 at the American College of Rheumatology Annual Scientific Meeting.  Researchers analyzed the effects of various footwear on patients with knee osteoarthritis.  Specifically, they looked at loading of the knees.

The first point the researchers make is this:

“In knee osteoarthritis, there is abundant evidence that patients with abnormally high loading knees (high amounts of stress on part or all of the knee joint) are at increased risk of both injury and disease progression.”

Now, the important research findings were these:

“Researchers found that clogs and stability shoes were associated with significantly higher loading of the knees, while the walking shoes and flip-flops resulted in lower knee loads similar to those occurring when walking barefoot. Therefore, shoes that allowed natural foot motion and flexibility appeared to be more beneficial in terms of knee loading.”

That final statement goes to the point that a natural stride, unaffected by modern high-tech footwear seems to be more healthy for us.  Here’s more supporting information.  Footwear Alters Normal Form and Function of the Foot is a 2009 Science Daily article that profiles a study on barefoot walking.  Specifically the researchers studied people who’d never worn shoes.  The researchers wanted to observe the biologically normal function of the foot which had evolved for millions of years without the influence of shoes.  They indeed saw habitually unshod feet moved performed differently from shod feet.  The article notes:

“Barefooters have a relatively wide forefoot and manage at better distributing pressures over the entire surface of the foot sole, resulting in lower (and most likely favourable) peak pressures. As such, the fundamental scientific results are also important for clinicians and for the design of quality footwear, which should not hamper the foot’s biologically normal function.”

In Part III of this series I’ll discuss new research that demonstrates running shoes actually contribute to greater stress at the ankles, knees and hips.