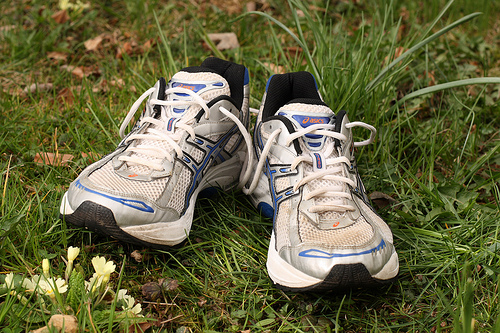 With the recent running of the New York City Marathon, some information on distance running seems appropriate.  The Human Body is Built for Distance is a recent story in the New York Times Health section.  Part of the discussion includes the theory that humans are unique among animals in our distance-running abilities. It seems that we might indeed be the fastest of earth’s land-based creatures over the long haul. Some of our advantages include our foot structure, spring-like connective tissue, our cooling system, our glycogen storage capacity, and even our sense of balance.

Of further interest is the discussion on running injuries and footwear.  Christopher McDougal author of Born to Run suggests in the article that many of our ancestors as well as some of our less-advanced contemporaries ran and do run many more miles with far fewer injuries than we do with our fancy modern running shoes.  The idea that primitive running is better running has been suggested  here, and here.  It’s also the driving idea behind shoes such as the Nike Free and Vibram Five-Fingers.  About 90 percent of runners training for a marathon experience injury according to statistics in the article.

Sort of makes sense right?  How long have modern running shoes been around?  Nike started business in the late 1970s.  Meanwhile, humans were running around a lot longer than that, their feet shod in some very minimal items. So what’s going on here? As our running shoes evolve are the wearers actually devolving?

I know enough to know that I definitely don’t know the answer to this question. I’ve gone back and forth on the issue and I’ve moved from running in Nike Frees to running in Nike Frees with Sole Supports in them. Isn’t that odd?  From what I’ve read and experienced though, the issue of high-tech running shoes vs. low-tech running shoes vs. barefoot running is an extremely personal matter. What works miracles for one running may wreck havoc on another. It can be a maddening process trying to find the ideal way to address your feet.

If this topic is of any interest to you, I recommend strongly that you read the Science of Sport’s series on running.  It’s remarkably in-depth in its analysis of shoes, feet, and running technique.