We’ve got three useful articles to point out.  One deals with recovery strategies for runners, specifically why damage is a good thing.  (I imagine this information will apply to other types of athletes–cyclists, swimmers, weightlifters/bodybuilders for instance).  Another article discusses research into how training in the heat can increase cycling performance in both hot and cool conditions.  Finally, research suggests a healthy lifestyle can affect cardiovascular health more than genetics.

When Damage Is A Good Thing

Steve Magness is a Washington, D.C. area runner and exercise scientist who writes a blog called the Science of Running.  Recently he’s written a piece for Running Times called When Damage is a Good Thing.  Magness does a good job of explaining the training adaptation cycle:

“We improve from training by putting our body through stress that it normally does not encounter. When the body encounters these stressors, whether it is a decrease in oxygen, increase in lactate or low glycogen stores, it responds by increasing our ability to deal with the stressors, thereby improving our running performance. The stress, recover and adapt cycle is the foundation of training.”

Most important to the article though is the discussion of how recovery methods such as anti-inflammatories, ice baths, and antioxidants may impede the adaptations we’re looking for.  Magness states:

“All of this scientific theory and research sounds good, but what does it mean practically?  It doesn’t mean that antioxidants, ice baths, Advil or taking a Gatorade while running is necessarily bad. It means using those items at the wrong time or after the wrong workout could negate some of those hard-earned training adaptations. The key is to understand when it’s beneficial to use those methods and when to avoid them.”

Read the whole article to understand the strategy Magness recommends.  It’s certainly an issue worth pondering if you’re a serious athlete–endurance athlete or otherwise.

Science Daily gives us an article titled Exercising in the Heat May Improve Athletic Performance in Cool and Hot Conditions.  Researchers at the University of Oregon studied two groups of cyclists: one group underwent heat acclimation while training and the other group worked out in a cool environment.  What did the researchers learn?

The study found performance increases of approximately 7 percent after 10 heat acclimation exposures. “In terms of competitive cycling, 7 percent is a really big increase and could mean that cyclists could use this approach to improve their performance in cooler weather conditions,” said researcher Santiago Lorenzo.

Healthy Lifestyle Wins Out Over Genetics

The final article,  Healthy Lifestyle Has Bigger Impact on Cardiovascular Health Than Genetics, also comes from Science Daily.  There are two big points from this article which discusses two studies. 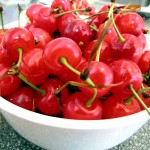 Try cherries before and after your next long ride, run or grueling workout.

Here’s another weapon to add to your endurance training recovery arsenal: cherries.  Marathon Runners Should Pick Cherries for a Speedy Recovery comes from Science Daily and it profiles a recent study out of Northumbria University in England.  Marathoners who ran the London Marathon were split into two groups.  Twenty marathon runners drank either a tart cherry blend juice or a placebo drink twice a day for five days before taking part in the London Marathon and for two days afterward.  The story summarizes the research findings as follows:

“The findings indicated that the group who drank the cherry juice recovered their strength more rapidly than the control group over the 48-hour period following the marathon. Inflammation was also reduced in the cherry juice group, as was oxidative stress, a potentially damaging response that can be caused by strenuous physical activity, particularly long distance endurance exercise.”

It might be reasonable to conclude that cherries could aid cyclists, swimmers, cross-country skiers and maybe strength & power athletes as well.  More research will be needed to confirm this guess.  In any event, adding cherries to any or all of your recovery strategies may be a simple and tasty idea.  (For more recovery methods, check out recovery nutrition, cold water immersion, and caffeine.)

Sounds like good news!  However I can see it now… Sports nutrition stores will soon be stocking and promoting cherry juice extract–in a pill!!  The stuff will cost more than cherries and probably won’t work.  Warm weather is coming and cherries will soon be in the grocery stores.  Buy ’em and eat ’em. 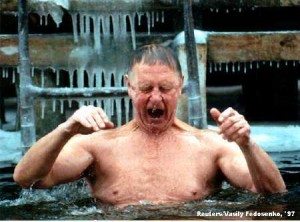 Post-workout nutrition was the focus of the last post.  Adequate intake of water, protein and simple carbohydrates is vital for repairing the body and preparing for subsequent endurance workouts.  We can add to the recovery strategy the use of cold water immersion.

Injury treatment has long featured the application of ice to strains, sprains, bruises and other injuries where swelling is present.  Strenuous or long bouts of exercise can damage muscle cells thus resulting in conditions similar to injury such as low-grade swelling, pain, and nervous system disruption.  Studies by the Journal of Science and Medicine in Sport, the European Journal of Applied Physiology, the Journal of Sports Sciences,  show cold water bathing was well as hot/cold contrast bathing reduces these symptoms and helps speed recovery.

Protocols for cold water immersion and hot/cold contrast bathing are discussed here and here.  (The idea behind the contrast method is to create a pumping action in the capillaries to speed blood flow and thus increase the recovery process) Peak Performance Online offers this free download titled How to ensure a speedy recovery from exercise.  (Peak Performance Online features many free downloads on a wide variety of sporting topics.  Definitely pay them a visit if you want to read a lot more.)

The basic protocols for cold water and hot/cold contrast recovery vary but are fairly similar.  Here are two examples:

Cold Water Immersion
If you are going to try cool or cold water immersion after exercise, don’t overdo it. Ten minutes immersed in 50-60 degree Farenheit water should be enough time to get the benefit and avoid the risks. Because cold can make muscles tense and stiff, it’s a good idea to fully warm up about 30 to 60 minutes later with a warm shower or a hot drink.

Contrast Water Therapy (Hot-Cold Bath)
If you prefer alternating hot and cold baths, the most common method includes one minute in a cold tub (50-60 degrees Farenheit) and two minutes a hot tub (about 99-104 degrees Farenheit), repeated about three times.

My own cold-water recovery has employed two simple methods.  First, when I lived in Virginia I had access to a swimming pool in the summer.  Following a ride or run in the hot weather, I got in the pool, preferably in a shady area, and relaxed.  This past summer in Colorado, I filled my bathtub with cold water so that my legs were covered and I dumped in a small amount of ice.  It was cold but not painfully so.  I sat and drank Recoverite and an energy drink with caffeine.  I found the results very beneficial.

Speaking of caffeine, I’ll discuss that in Part III.