If you found the previous post interesting then you should read the following articles from the L.A. Times.  Sugar: The toxicity question and what to do about it cites the NY Times article on sugar and discusses the issue further.  Also from the L.A. Times is Food technology has been bad for human health since long before the invention of high-fructose corn syrup.  Bottom line, modern food technology and refinement aren’t doing the human race much good.  If it ain’t pulled off of a tree our out of the ground, or if it wasn’t recently running or swimming free, then you should reconsider eating it.

The New York Times Magazine has a remarkably in-depth piece on sugar called Is Sugar Toxic? We get a lot of information on the sweet stuff from the history of sweeteners to the differences between sucrose and high-fructose corn syrup (There seem to be no differences.) to some of the unique physiological effects of sugar. Dr. Robert Lustig of the University of California San Francisco is a source for much of the information of the article.  He’s an endocrinologist who recently has focused on preventing obesity in children.  He contends that sugar calories are different from other sources of calories, and that sugar is genuinely poisonous to human beings.  (You can watch Lustig’s lecture,Sugar: the Bitter Truth on Youtube.) 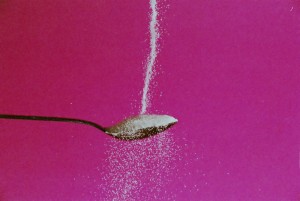 Among the evils ascribed to sugar in the article: obesity, diabetes, metabolic syndrome, and atherosclerosis caused by elevated blood triglycerides (fat) which often results in heart disease. This idea that sugar causes blocked arteries is somewhat controversial and runs counter to several decades of “conventional wisdom.”  The article also suggest that in fact sugars may play a strong role in developing cancer. For years it’s been dietary fat that’s been the bad guy in the heart disease fight.  And to this point, the article does a good job of dissecting the various theories and evidence either in support of and/or against both sugar and fat as the edible evils in our lives.  I won’t go into all the fine details here but the discussion should remind us that one theory doesn’t necessarily cancel out another (Could be that both sugar AND dietary fat aren’t that great for us.), and that science is indeed a human endeavor which is subject to human emotion and judgment. The discussion on sugar and cancer is one that I’ve not heard before.  There is evidence to suggest that chronically elevated insulin plays a strong role here much as it does with diabetes.  Researcher Lewis Cantley, director of the Cancer Center at Beth Israel Deaconess Medical Center at Harvard Medical School, says:

“I have eliminated refined sugar from my diet and eat as little as I possibly can, because I believe ultimately it’s something I can do to decrease my risk of cancer.” Cantley put it this way: “Sugar scares me.”

That’s a strong statement by someone with what seems to be a thorough knowledge of his subject.  It certainly has me thinking about this stuff more than I have.  I love dessert and so does my wife.  We devote just one day a week to indulging in something genuinely tasty and fantastic.  I think that’s a fairly low level of consumption but now I wonder if sugar is like cocaine or meth.  Perhaps there is no such thing as a “moderate” amount of sugar. What is clear to me is that less is best.