In the previous post I discussed my difficulty in solving my running-related pain issues.  Analyzing and changing one’s running technique is a challenging thing, but I’m going to attempt it.  I’m mainly going to discuss running here but these concepts apply to walking as well.  (Don’t think that poor walking mechanics don’t matter.  We spend a lot of time walking.  If we’re doing it wrong then we’re really hammering the body into a mangled mess.)

Really important thing #1: Let the foot drop right below you.  Don’t reach out with your heel.

It’s vital to get the foot strike correct when running.  I now realize that for years I was reaching forward with my leg, putting my heel out in front of me, and hitting the ground with my heel. This is bad.  It promotes overuse of the hamstring muscles and de-emphasizes the glutes.

I then spent the past year to year-and-a-half trying a forefoot strike.  I thought this was an effective correction of my heel strike but I was still doing several things wrong.  First, I was still reaching out ahead of me.  As a result I was still using my hamstrings too much and I wasn’t using my glutes enough.  And though I was hitting with my forefoot and avoiding a heel strike, I wasn’t allowing my heel to settle to the ground.

Now I’m doing things a lot better.  First, I drop my foot directly below me.  In fact, it feels like my foot is dropping behind me.  Let me emphasize the word “drop.”  I passively let the leg unfold underneath me and let gravity pull my foot to the ground.  I don’t actively try to do much of anything with my foot.  I often pay attention to how things feel down there but I don’t try to pull my foot off the ground or push off in any particular way.  Steve Magness discusses this process in is superb post How to run with proper biomechanics.  I’ve bolded the key points:

Once the knee has cycled through, the lower leg should drop to the ground so that it hits close to under your center of gravity. When foot contact is made, it should be made where the lower leg is 90 degrees to the ground. This puts it in optimal position for force production. The leg does not extend outwards like is seen in most joggers and there is no reaching for the ground. Reaching out with the lower leg results in over striding and creates a braking action. Another common mistake is people extending the lower leg out slightly and then pulling it back in a paw like action before ground contact. They are trying to get quick with the foot and create a negative acceleration. This is incorrect and does not lead to shorter ground contact times or better positioning for force production. Instead the paw back motion simply engages the hamstrings and other muscles to a greater degree than necessary, thus wasting energy. The leg should simply unfold and drop underneath the runner.

I know I’m running well when it actually feels like the foot is dropping behind me.  (It’s not actually behind me, it’s just dropping quite a bit further back than it used to.)  I now focus on hip extension when I run, or using my glutes to drive my leg back.  With this proper foot placement I can feel my glutes turn on and propel me forward.  It helps to have a slight forward lean through this process.

This concept of what I call “lengthening through the hip” has had a massive impact on my walking and running technique and thus my pain issues as well.  Denver-area physical therapist Rick Olderman helped me solve a strange little bodily riddle I’d had for years, and this hip lengthening process was right at the core of it.

For a long time I noticed that standing on my right leg was a lot different from standing on my left.  When I would stand on my right leg I always sort of tipped or shifted to the right.  It didn’t feel right.  My balance would shift in a sort of exaggerated way.  This was happening every step.  Standing incorrectly on my right leg when walking and running also meant I would land badly on my left leg.  Lengthening up and pressing my weight through my hip into my foot solved this issue.

This concept is a little tough to effectively describe in words but here goes:  As my foot hits the ground below me, I think of lifting my trunk away from hip.  In my mind the hip and the rib cage of the stance leg are separating–moving away from each other, and I’m sort of getting taller in the process.  I don’t think of bounding or hopping though.  I’m trying to make my leg longer below me and behind me as I move forward. A slight lean forward from the ankles helps me do this all correctly.

This movement is sort of a subtle kind of thing to grasp.  Describing this process is sort of like describing chocolate to someone who’s never tasted it.  It’s not like simply flexing your elbow or bending your knee.  It’ll probably take a bit of practice to get a feel for this.  The goal should be to take this strange-feeling novel movement and turn it into a habit. The video below should help explain this.

However, just like throwing a baseball or shooting a basketball, running is a skill that must be learned.
– Steve Magness, running coach

For almost 10 years now I’ve confronted various chronic aches and pains.  I love to run but often my running efforts have been derailed by some extremely frustrating issues.  My most recent battle has been with Achilles pain/heel pain/plantar fascitis/somesuch in my left foot.  I’ve been dealing with these issues for about two years–and it’s driven me insane.

Of course the idea of quitting is nonsense.  Humans should be able to run.  I want to run and so I’ve searched for a solution.  I can very happily report that it seems I have indeed found the key and I’ve spent the past eight weeks or so running almost daily.  Seems up until recently I was walking and running incorrectly.  Now I know what I’m doing!

Thanks to Rick Olderman

First I must thank Denver-area physical therapist Rick Olderman for helping me with this process. He’s by far the best physical therapist I’ve ever worked with–and I’ve worked with quite a few.  Rick truly understands movement, not just muscles and joints. He’s helped me see and feel what I’ve been doing wrong and how to change my ways.  If you’re battling with chronic pain and you’re in the Denver area, I highly recommend a visit to Rick.

The idea of learning (or re-learning) how to walk and run is sort of a strange thing to consider. Most of us are able to use our legs to ambulate across the earth at various speeds.  We typically don’t need to spend much time thinking about how to do this stuff, we just do it.  But how well do we run or walk?  In my case, I developed poor movement habits–but I didn’t know it.  I never actually lost the ability to walk/run, I just lost the ability to do these things efficiently and properly.  We know that habits are very hard to break, especially if we can’t identify them.

Identifying and dissecting poor walking/running habits is pretty tough.  We’re talking about fairly complex processes that we do without thinking.  It’s like blinking or breathing.  Analyzing this stuff is challenging and then teaching someone a new method of walking or running is even tougher.  As a strength coach and personal trainer, I can say that we rarely consider how to teach someone proper gait mechanics.  At the Science of Running, big-time running coach Steve Magness discusses this issue in his excellent blog post titled How to run with proper biomechanics (This post is absolutely essential reading for any runner or running coach.):

“Distance runners and coaches seem to hate the topic of running form. Most subscribe to the idea that a runner will naturally find his best stride and that stride should not be changed. However, just like throwing a baseball or shooting a basketball, running is a skill that must be learned. The problem with learning how to run is that there are so many wrong ideas out there. This is partly due to the complexity of the process and partly due to a lack of understanding of biomechanics. It’s my belief that the wide range of “correct” ways to run has led to this apathetic attitude towards running form changes by most athletes and coaches.”

Over the next several posts I’m going to discuss my understanding of gait mechanics and how you can analyze and improve your gait.

So where are we?  We’ve covered the different flavors of stretching.  I now need to go back to something I said in Part I: No human movement is possible without stretching.  This is going to get a little more complicated before it gets simple–but I promise to give you information that you can actually use outside the game of Jeopordy! 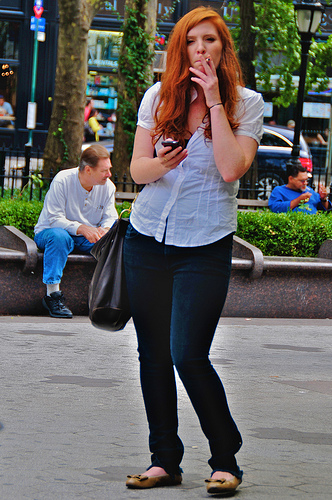 Each time we move, we use energy stored in stretched muscles to drive our limb into movement.  When I take a step forward for instance, I hit the outer part of my heel and it rolls inward (calcaneal eversion).  The arch of my foot pronates a bit, and it pulls my calf muscles (soleus, gastrocnemius, posterior tibialis, among others) inward which takes my lower leg (tibia) inward into internal rotation.   At the same time, my body is moving forward over my ankle which creates dorsiflexion.   The tibial internal rotation also causes my knee to flex and internally rotate.   Once the knee moves in, it pulls on the IT band which is attached to my glute complex and now my glutes lengthen both forward and inward and my hip flexes–and if my hip is functioning properly it will move sideways into adduction in the direction of this leg that just took a forward stride.  So all these muscles have worked and stretched to keep my foot and leg from collapsing into the earth.  Now these muscles have all been turned on and with the energy stored inside them like stretched rubber bands they will propel me forward into my next stride.

WOW!!!  Are you kidding me!!  What a lot of stuff!!  And that’s the story from just from the waist down!  All that and this lady can still manage to smoke a cigarette.  Did you notice how many muscles were stretched in this process, and in what directions?  Parts were moving forward, back, inward, outward and sideways.  As Gary Gray terms it, this is 3-D loading to exploding.

In all seriousness, this sequence of events must happen in order for our bodies to efficiently produce force and absorb shock.  Each stretch of each muscle in turn activates muscles up the line.  If this process is inhibited (could be due to injury, sitting too much, doing the same thing over and over and over, or who-knows-what) then we tend to get knee pain, back pain even shoulder or neck pain.

These movements aren’t just important for walking and running.  Proper movement in all three dimensions is vital for cyclists, skiers, dancers, even swimmers–even though their movement patterns are different from walkers and runners.

In Part III I’ll build on this whole process and show you an effective way to mobilize some important regions of the body via dynamic stretching.