This past Saturday I ran the Denver Rock ‘n’ Roll Marathon–my first marathon. My time was 3:57:15 for an average pace of 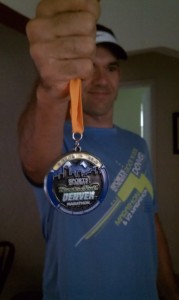 Proof that I helped tie up Denver traffic on Saturday.

9:02/mile. (For the record, I beat Paul Ryan’s official marathon time by 4 minutes, 10 seconds. However, in his imagination, he definitely beat me.) This race was a culmination of about 10 years of my overcoming various aches and pains brought on not by running, but by moving–walking, running, standing, lifting, anything else that counts as moving–incorrectly. I’ve overcome these issues and the marathon was a victory lap.

It was definitely a fun experience but it was very tough and fairly uncomfortable. I was very sore and way beyond fatigued by the end of the race.  I’m sore in some unexpected ways. My feet were very beat up it as you might expect. My thighs and hamstrings were plenty sore too which is no surprise.  It’s Tuesday and I’m feeling decent now.

Interestingly, my lateral abdominal muscles are quite sore. I’m fairly certain it’s my external obliques that are sore and this is actually a good thing. It means that I was using them correctly. Part of my pain problems were rooted in incorrect use of my external obliques. Now I know they were put to very good and thorough use yesterday. (For more info on the role of the role of these muscles in running, check out this three-part video series of from the Gait Guys: part 1, part 2, part 3. I’ve been using elements of these videos with some of my clients to very good effect.) I’ll refer back to my run technique in a moment.

Things got tough at mile 18/19. I was about hip deep in the suffering by then. That’s where my pace slowed and I knew hitting my goal time would be very difficult if not impossible. My legs were hurting. The crowds had thinned out a good bit by then and what I knew would be a long lonely stretch lay ahead. That I had about 10 miles to go wasn’t the most joyous thought I’d ever had. I was functioning though and there was no sign of anything like an injury.

I’d planned to run with a pace group. There were several pace groups dispersed throughout the event. My goal time was 3:45 and there was a 3:45 pace group. I got to the race very early but I was late getting to my corral. Thus I couldn’t find the 3:45 group. My fault entirely but it wasn’t a disaster, just a bit of a bummer. Got kind of lonely out there, especially at the later miles. Suffering with others is better than suffering alone. Being that I missed my goal time, I can’t help but wonder how my race would’ve gone had I gotten in with the group….

Not much slowed me down but one thing definitely took a little momentum away. I’ve had a little trouble with blisters on my toes mostly on my right foot, only once on my left. Because of this I often tape several of my toes. My mistake was that I taped some of my toes on the left but not all. Not long into the race I felt friction against my left pinky toe. I knew this would probably turn into a sizeable problem well before the race was over. The only solution was to stop, sit down, take off my socks (compression socks which are long and fit tightly thus they’re sort of hard to get back on), remove the tape, get everything back on and resume running. That took a few minutes. I took one bathroom break but other than those stops I kept running.

Brutal is the word I’d use to describe miles 22 through 26.2. There were several short/steep hills on what was a steady false-flat that led back into downtown. (In fact, I’m convinced that during this marathon, the very laws that govern the universe were broken. We started and finished in the same location yet 99/100s of the whole course was uphill. I believe the course was designed by MC Escher.) Four miles to go was A LONG way to go. The idea of stopping to walk just a little was very tantalizing. I knew if I started walking I might not start back running. It was also fairly warm–not hot–but warm enough to add real difficulty to the whole process.

Somewhere around mile 21 I felt a potential hamstring cramp in my right leg. I wasn’t sure if it was an electrolyte issue but I didn’t really think so. I’d taken some salt pills before and during the race and I was consuming fuel containing electrolytes as well. The cramp didn’t really come on until I was crossing Speer Blvd right at about mile 25. I felt that right hamstring start to ball up underneath my right glute. I thought I was done! I thought I was going to have to walk the last mile and I finish well over the four-hour mark. This was about to be a minor disaster. I was fine though. Why?

Earlier I mentioned my glutes, external obliques, and my running technique. I went right back to the running method described in those Gait Guys videos. I focused on lengthening through the hip into the ground and letting the right hip drop away from the right bottom rib as my right foot struck the ground. I did this for a few strides and the cramp simply vanished.

I intend to run more marathons.  I’m not sure which one(s) or where.  I want to get faster.  Run Less, Run Faster tells me that since I finished slower than my 5k time predicted I need to work on my endurance.  I definitely want to run with a pace group next time.  (God that was dumb of me to miss the group…)  My shoes (Nike Free 3.0) and nutrition seem solid.

My next race (probably) is the Run the Rocks 5k in October.  Then I’m only doing random, unstructured runs for a while.  I’ll run with my dog then some time this winter I’m going to do one or two track/sprint workouts per week with random longer runs whenever I feel like it.  I’m looking forward to getting into the weight room and working on my clean and press, squat, and deadlift.  For now though I’m very content to not run for a few days.

3 thoughts on “The Marathon: Done and Done”