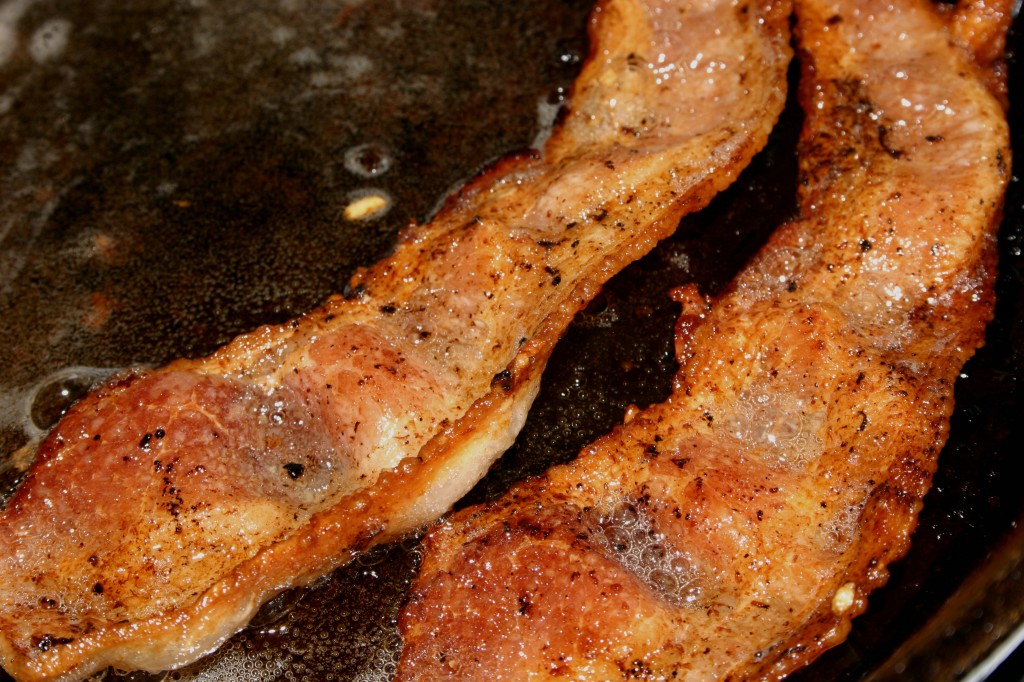 I call this portrait "Health Food."

I grew up in the years of the low-fat craze.   We were told that reducing dietary fat and cholesterol—particularly animal fat—was the best way to lose weight and improve our health.  We saw wide scale proliferation of fat-free and reduced-fat food products.  These products were then stuffed with sugar and weird chemicals that were and are very detrimental to our health—but hey!!—there wasn’t any fat.  Ironically, this low-fat era saw an exponential expansion of  American’s waistlines and all the associated chronic diseases such as heart disease, diabetes and cancer.

“As science writer Gary Taubes notes in Good Calories, Bad Calories, Senator George McGovern’s Select Committee on Nutrition and Human Needs, in coming up with its diet plan, had to choose among very different nutritional regimes that scientists and doctors were studying as potentially beneficial to those at risk for heart disease. Settling on the unproven theory that cholesterol was behind heart disease, the committee issued its guidelines in 1977, urging Americans to reduce the fat that they consumed from 40 percent to 30 percent of their daily calories, principally by eating less meat and fewer dairy products. The committee also advised raising carbohydrate intake to 60 percent of one’s calories and slashing one’s intake of cholesterol by a quarter.

Some of the country’s leading researchers spoke out against the guidelines and against population-wide dietary recommendations in general. Edward Ahrens, an expert in the chemistry of fatty substances at Rockefeller University, characterized the guidelines as ‘simplistic and a promoter of false hopes’ and complained that they treated the population as ‘a homogeneous group of [laboratory] rats while ignoring the wide variation’ in individual diet and blood chemistry. The Food and Nutrition Board of the National Academy of Sciences released its own dietary suggestions, which saw ‘no reason for the average healthy American to restrict consumption of cholesterol, or reduce fat intake,’ and just encouraged people to keep their weight within a normal range.”

The very strong and very thoughtful lads at T-Nation.com give us a simple and worthwhile article on fat titled Fats Made Simple.  This article goes into the various attributes of different fats and oils, which are best to cook with, which ones are best used as a topping, and which ones to avoid altogether.  The issue of Omega-3 and Omega-6 fatty acids is discussed.  I won’t go into every detail but here are some key points from the article:

— Use saturated fats for cooking.  These are less likely to become rancid and toxic during the cooking process.

The author’s top 6 oils are:

— soybean
(Next time you’re looking at ingredient labels, see if you spot any of these oils–particularly corn, canola and soybean.  Chances are you’ll find at least one if not several.  They’re in everything!)

The Perfect Health Diet is an example of a a diet that’s high in healthy fat.  It was developed by two scientists who wanted to address some of their chronic health issues.   This plan has adherents eating about 2/3 plant foods and 1/3 animal-based food.  Besides a high fat content, the diet is further characterized by complete avoidance of sugar and cereal grains such as wheat, corn and oats; this due to their inflammatory nature.  (If you cut out the processed food then you’ll cut out a lot of sugar, wheat, corn etc).  Legumes such as soy and peanuts are also to be avoided as well. Here are more details of the diet.

Please take note, dietary animal fat should come from free-range grass-fed sources.  Most of the mass-produced grocery store meat is chock full of garbage such as added hormones and antibiotics.  Plus the animals are fed stuff they’re not meant to eat.

I’m currently on this eating program.  Admittedly, I haven’t followed it 100% but I’m working in that direction.  I definitely feel more energetic having reduced my grain intake.  I realize when I do consume grain, I tend to get a bit bloated.  The odd thing is eating and really enjoying a lot of foods that for years I thought were really bad for me: butter, bacon, whole eggs, chicken with the skin on it, organ meats.  I’m quite interested in sticking with this plan, further “perfecting” my eating, and seeing where it takes me.

One thought on “The Skinny on Fat”