I ran my first Imogene Pass Run last weekend and it was a monumental experience. The race was both exhilarating and brutal. The environment and scenery were stunning beyond words (but here are some words.) Living in Colorado, we get used to seeing some amazing scenery. That said, the landscape of this race course was inconceivably dramatic. The San Juan Mountains are the creme de la creme of what Colorado is all about. My wife and I loved the town of Ouray and we can’t wait to go back. 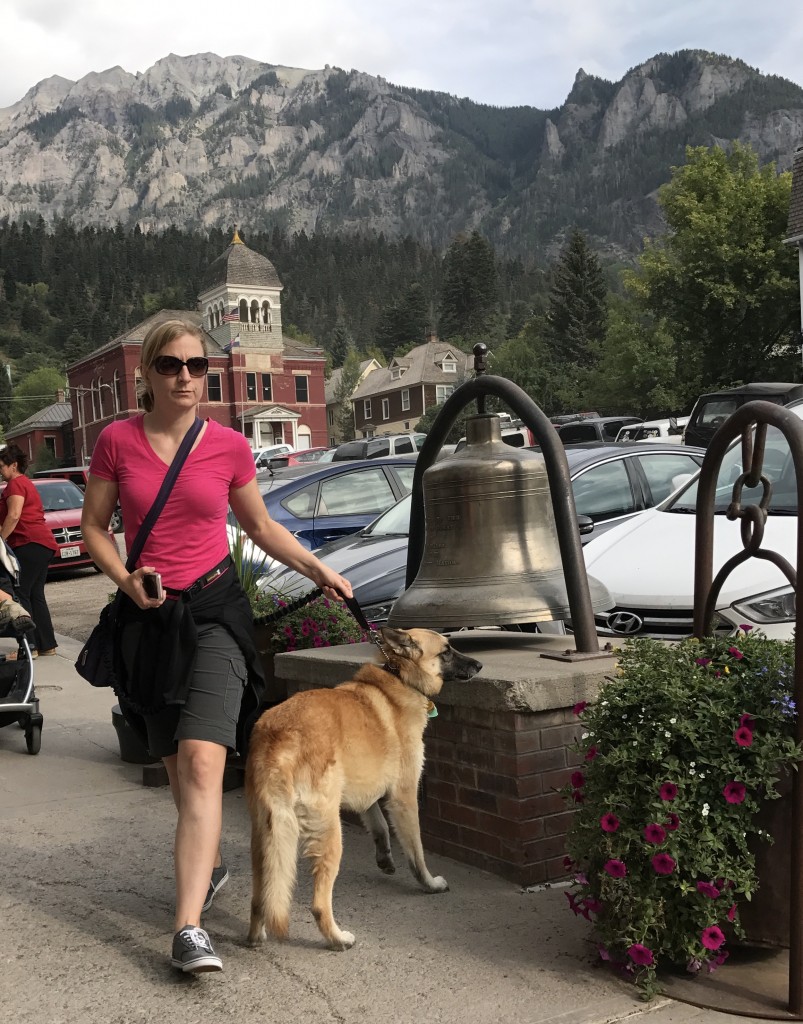 The wife, the dog, and spectacular Ouray, CO

Before going much further, I must give credit to my coach, Mary-Katherine Flemming for helping me prepare for this monster. My hiring her to help me was an excellent decision. She planned a variety of progressively challenging workouts, gave me honest, useful advice, and made me feel confident as I moved toward the race. I plan to enlist her again in future races.

I was very pleased with my uphill abilities. None of the climbing was easy but 99% of the time I felt strong and able. The final mile was rough. And by rough I mean nasty. (I’m holding back on the foul language that’s essential to describe what I’m talking about.) The average gradient was 18.9% with a max gradient of 33%! Steep slopes plus an ever thinning supply of O2 was almost overwhelming. That the fastest runners are still running at this point in the race is an absurdity to me! 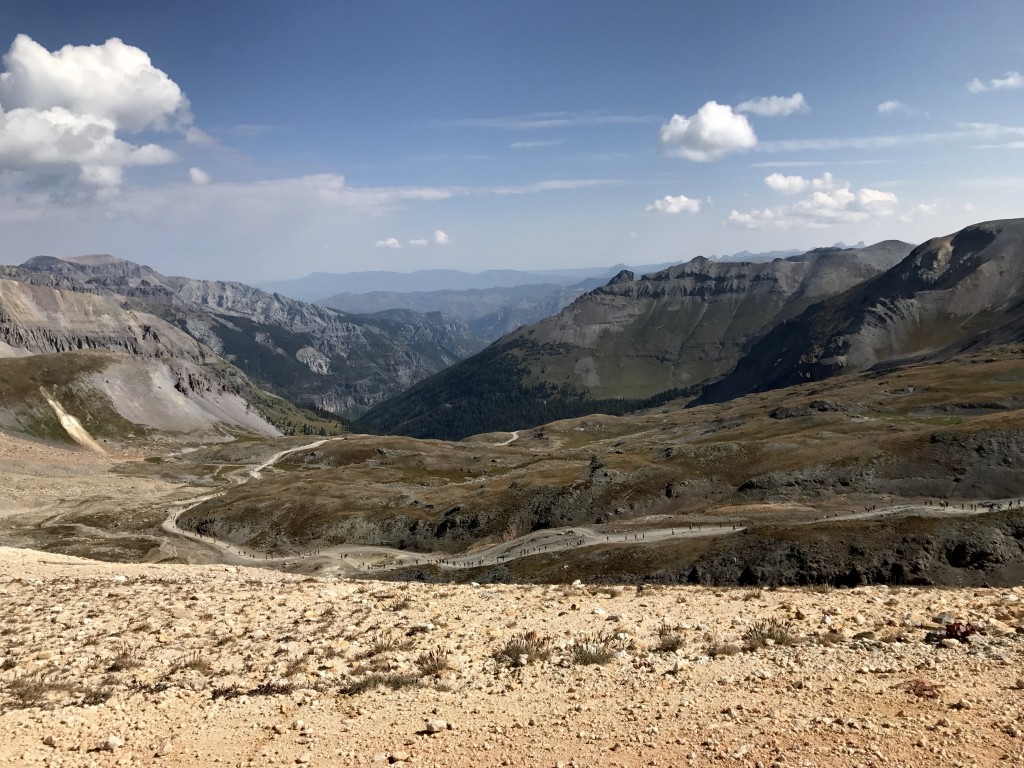 A brief pause before the summit. Look closely. Can you see the people on the trail?

Slow-slogging it was an attractive option at times. I saw many participants doing a sort of meandering tromp and the siren song of a slower pace was enticing. It definitely felt good to slow down just a bit. I didn’t allow myself to get comfortable though. I was there to do the best I could, not be comfortable. I didn’t “just want to finish.” So when the going got very tough I continued to push as hard as I realistically could while not blowing up.

I found smaller quicker steps were better than long strides. Try climbing stairs two or three at a time vs. one step at a time and you’ll experience this. Sure you can go faster if you take longer steps but you’ll burn out faster too. That’s not a successful strategy for this race. 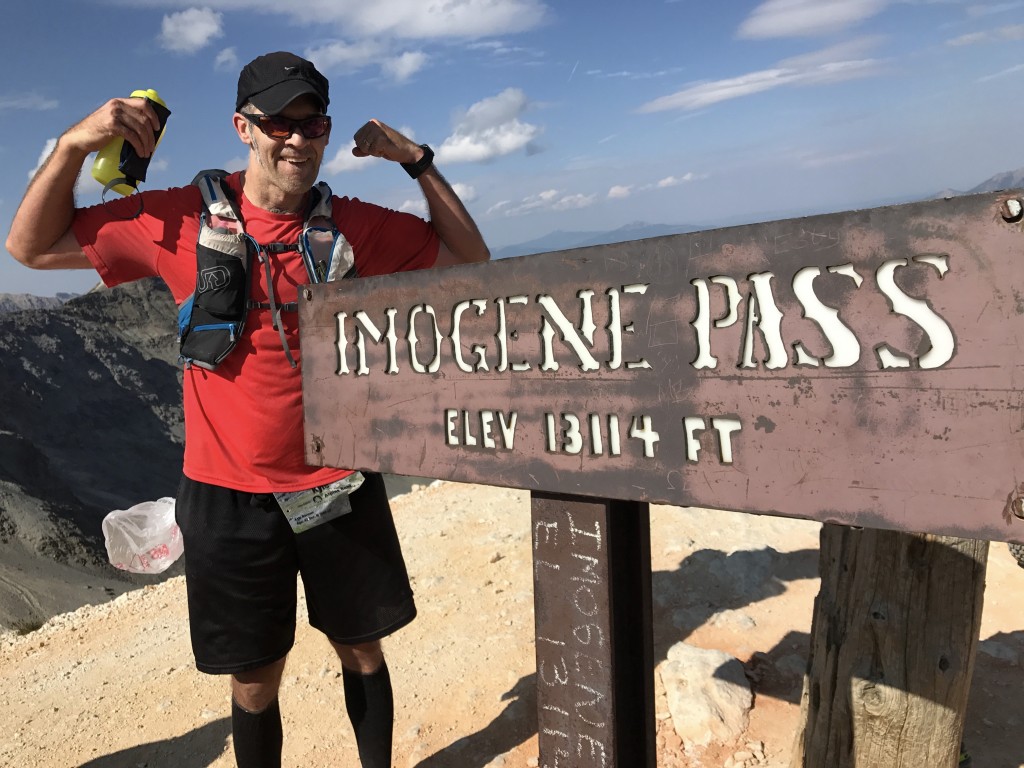 Savage and unrelenting are good words to describe the descent. The entire route was loose rocks and dirt of the sort that demanded constant attention, focus, and concentration. There was never ever an opportunity to coast, to relax, to take it easy in any way. To let the mind wander was to fall and f__k oneself up badly. 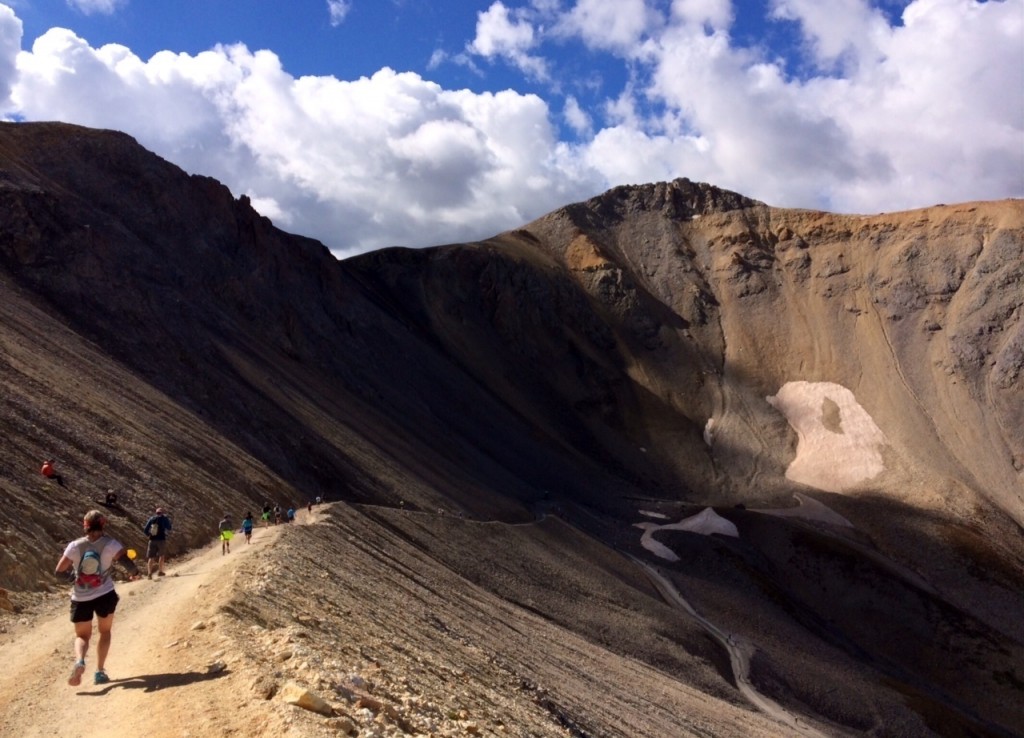 The start of a long, technical downhill. Much soreness awaits.

I experienced a very strange sensation during the descent. There were were times when I wanted to close my eyes and fall hard asleep. It was almost like I had narcolepsy or something. I’ve never had it happen before. I actually felt like I could’ve napped on my feet. I have no idea why. Do I have to mention that this experience was no help at all?

The technical descent demanded that I focus just a few feet out ahead to know where and how to place my feet. This was an exceptionally difficult task, especially as the descent took over an hour. The urge to let up a little, concentrate a little less, and look well down the trail was alluring but it would’ve been a disaster had I done so. So the entire descent involved determined concentration. If you’ve ever had to concentrate while (extremely) fatigued then you know it’s a uniquely difficult task. 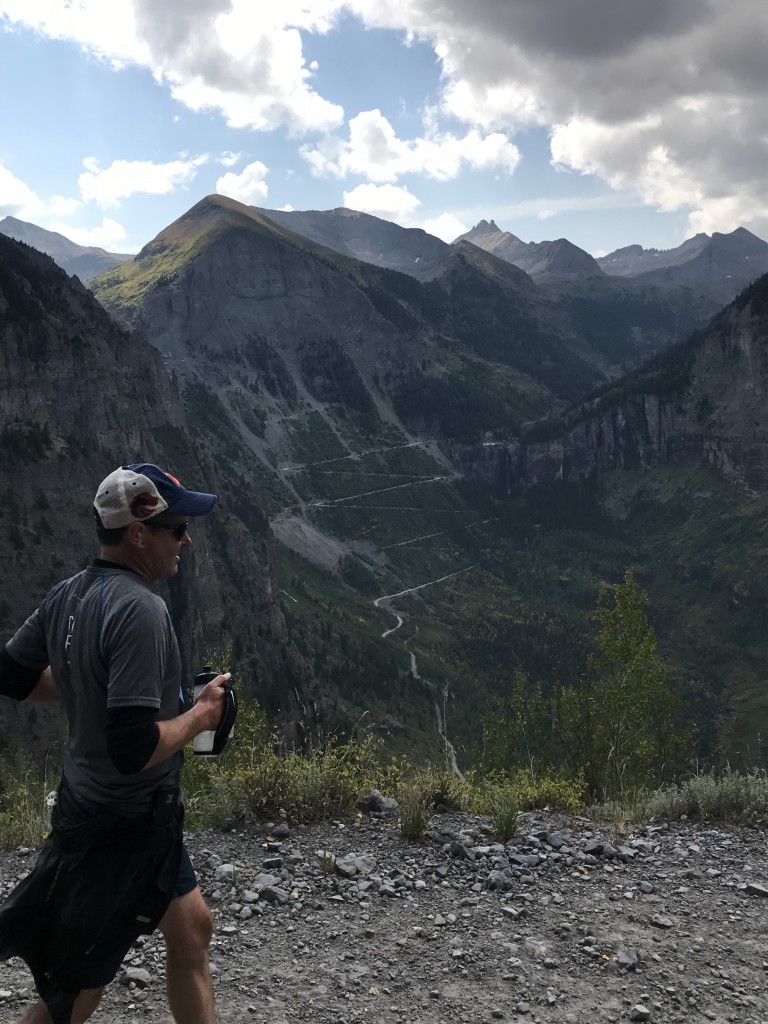 I have no idea where that switchback road goes. I’d like to find out.

I had some cramping near the top of the ascent. They continued to flare up during the descent. I had some cramping episodes during training runs and I wasn’t surprised to cramp during this race. What worried me is that I’d cramp badly and be reduced to a walk. That would’ve crushed me. Fortunately, I developed a strategy during training that allowed me to keep the cramps at bay to an acceptable degree. I employed that strategy in the race and though not perfect, it again allowed me to keep running.

I ran while internally and externally rotating my femurs. In other words, I’d run for several strides alternating between a duck-footed or pigeon-toed position. Somehow this would push the cramps away for a while. I had to do this several times during the descent. It’s definitely not an optimal way to run, especially over rough ground, but it worked. I also had to walk but only a very little.

My belief is that I employed the principle of reciprocal inhibition to relax my cramping muscles. Here’s an example: The muscle opposite your bicep is your tricep. Contract your bicep and your tricep will relax to allow for elbow flexion. That’s reciprocal inhibition and that’s how we move. In my case, my adductor muscles (inner thigh muscles, aka hip adductors and internal rotators) cramped. Thus I guessed that by activating those muscles’ opposite numbers (my hip abductors and external rotators) that I might be able to calm the cramping inner-thigh muscles. Seems to have worked. Further, it’s possible that by altering my bone and joint positions with this weird running technique it allowed some of the cramping muscles to rest just a little bit. 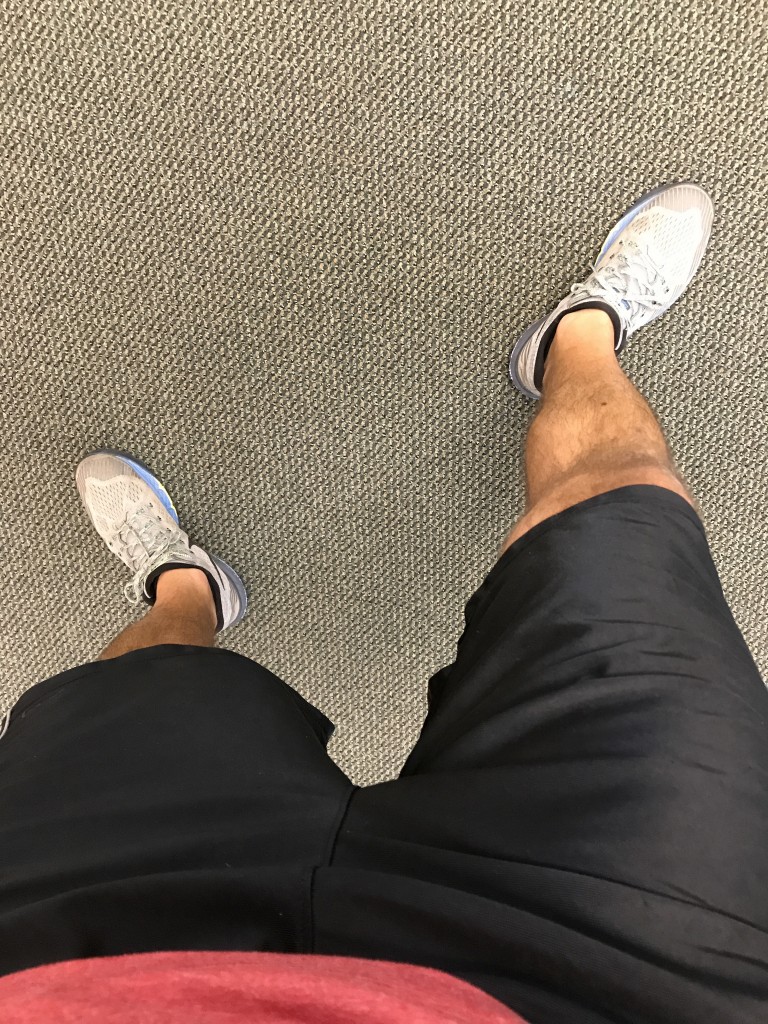 External rotation of the femurs

I won’t go into all the details of muscle cramps but I’ll say that it’s highly unlikely that it’s either dehydration or electrolyte depletion that causes them. It’s more along the line of intramuscular dis-coordination. For a brief and worthwhile discussion on the current ideas on muscle cramps and how to avoid them, then follow that link. 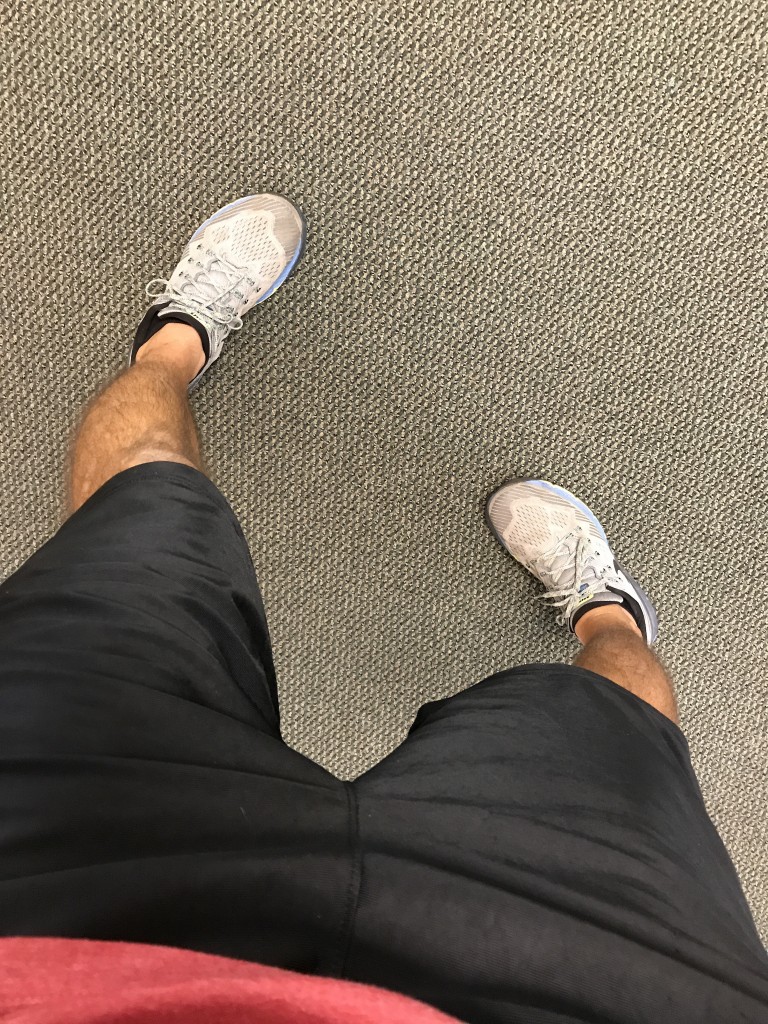 Internal rotation of the femurs

To see all the final stats for all runners go here. My numbers are as follows:

I like those results. This race was no easy fun run. You have to come prepared to finish it. I worked hard and I feel like I belong among some high-end athletes. I want to do my best and I want to get better. The top finisher in my age category finished in 3:02. I wonder how close I can get to 3 hrs… Coach Flemming, what are your thoughts?

(Honestly, I’m amazed that I’m thinking of running it again. After that finish I was certain that I didn’t want to run anywhere for any reason maybe ever again. What nonsense!)

What would I do differently?

I would love to get this thing done in under four hours. That seems realistic in good weather. If I want to race this race faster and/or just feel better then I need to improve my downhill conditioning.The descent is 7.1 steep, loose miles which is a very long distance. With that in mind,  I need to dedicate more time to running downhill on witheringly tired legs. There aren’t many opportunities outside of this race course to descend that far. (If you know of one in the Front Range area, please let me know about it.) I will confer with my coach on the subject but in my mind, I might want to incorporate something like giant hill repeats. For these I would run up something like Chimney Gulch, Mt. Falcon, Deer Creek, parts of the Bergen Peak Trail, or maybe best of all, Herman’s Gulch, then run back down and repeat the whole nasty process a few times. I think a few near-crippling workouts like this might help me survive the horror show/descent a little better.

Here is some superb photo documentation of the race. This guy isn’t me and I don’t know him but he deserves accolades for how well he captured the runners and the exquisite scenery.