The main event for the year is the famed/notorious Imogene Pass Run. (Three days and a few hours to race time! Am I ready? Doesn’t matter does it? That’s when I’m running.) The website gives the basic description:

“The Imogene Pass Run (IPR) is a 17.1 mile point-to-point mountain race within the western San Juan mountains of Colorado, run along a route which connects the towns of Ouray (7810 ft.) and Telluride (8750 ft.) by way of 13,114 foot Imogene Pass.”

This race has us climbing 5300 ft. After having run multiple 3000+ ft runs, I can confirm that THAT’S A LOT OF CLIMBING. I ask you to ponder, as I have, this passage from the course description:

“Mile 5.45 –   Lower Camp Bird bridge (9755 ft.), spanning Sneffels creek. At this point the runner might philosophize a little and consider just where he or she is in this effort called the Imogene Pass Run. At this bridge you have climbed 1945 feet (net) of elevation in 5.45 miles, at an average of 356 ft./mi., or 6.8% gradient overall. To reach Imogene Pass from here you must climb 3365 feet in the next 4.60 miles, at an average of 731 ft./mi., or 13.85% gradient overall. Your effort so far has simply been a warmup. The steep gradients of the named hills below you are now less than the average gradient ahead of you.”

If you’re not familiar with trail running and/or hiking then these numbers may not mean much to you. If you are a trail runner and you’re a mere mortal such as I, then your head might swim.

My coach, MK Flemming, says she has no worries about my completing the race. That’s solidly reassuring to me. My hope is that I complete it in a respectable time. (That it’s called a “Run” is optimistically generous. Most of us will be doing something like a power hike up that mountain.)

The site suggests that our run time will be similar to our marathon time. My only road marathon was 3:57. A finish time of 4-5 hours sounds good to me.

Not only do MK’s words give me confidence about the race, but I also I know that I’ve put in the time and effort to prepare for this race. I’ve spent a lot of time trail running. Training started in March. I’ve completed several 4+ hour runs. The race tops out at 13,000 ft. and I’ve been in and around that elevation several times. Runs at 10,000 ft. and above have been common in my training. Gaining elevation has been bread and butter on my runs. Several times a week I’ve gained anywhere from 2000 ft. to nearly 4000 ft. of elevation. Much of that work has been done on 15-20% gradients which is what I’ll encounter on the IPR.

The only minor worry that I have is that I haven’t actually gained 4000 ft. during a run. I’d planned to do so but there aren’t many routes that boast that elevation. I considered ascending one of the nearby 14er peaks but most of those peaks contain scrambling over boulders and scree to get to the summit. Those conditions won’t exist at the IPR. Again, this is not a major concern to me.

In order for success to happen, one must find a way to love the process. (I’ve discussed the idea here.) The mountains are my favorite place to be. I crave time in the wilderness. Solitude and epic views are magic. I always want to go and I never want to leave. (BTW, Time spent in nature can have powerful positive effects on us.) Trail running in the Rocky Mts is more than just fun or recreation. It’s church. Some of my favorite runs include:

I can’t say my heart swelled for every run. A good portion of my training occurred on the steep pitches of the service roads on N. Table Mt., Green Mt. and the short but utterly ridiculously steep Mt. Morrison Trail. These weren’t the most scenic runs. They were nasty and dirty. Thinking of them, I envisage a world filled with the most towering foul language. Still, I love the process.

All that time on the trail demands adequate gear. Two of my favorite items are these: 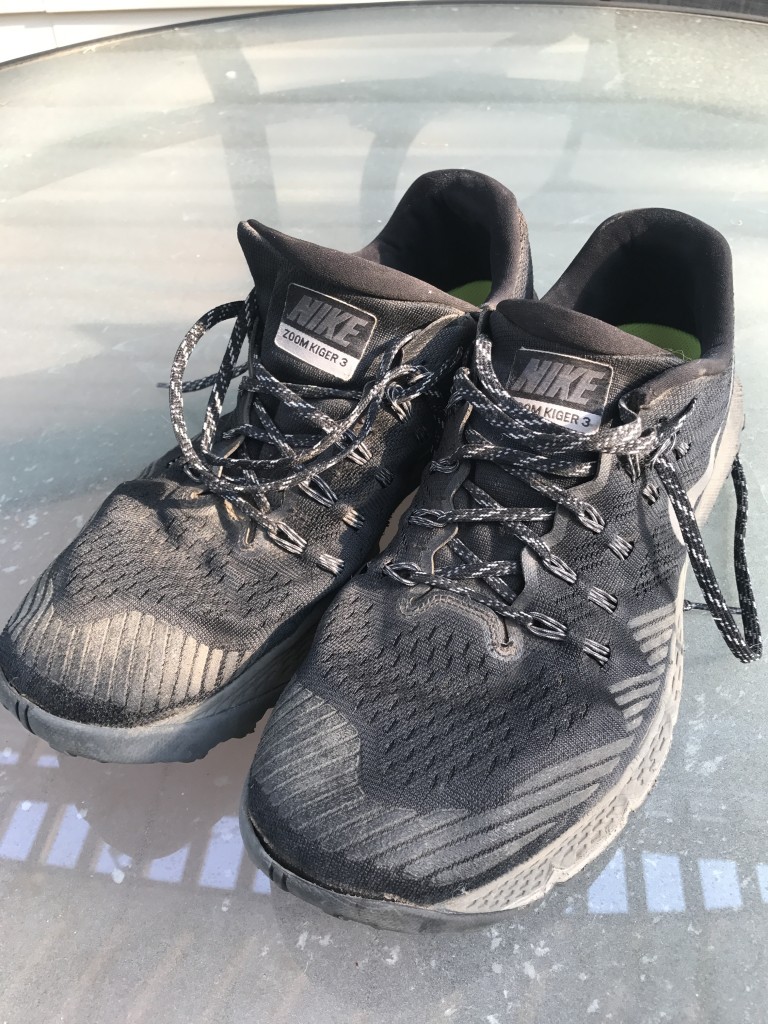 The Nike Zoom Terra Kiger 3 has made my feet very happy. I’ve gone through two pairs. What I like most is the roomy toebox. I’ve had problems in the past with losing some toenails due to friction up front. I’ve had no such grotesque problems with these shoes. And though there’s plenty of room up front, the rest of the shoe is comfortably snug which is reassuring while running over variable terrain. The grip is very solid. The shoe is comfortably flexible and it has what seems to be just the right amount of cushion to protect my feet from sharp rocks and such.

Next, the Ultimate Direction PB Adventure vest has been an excellent purchase. It’s light, breathable, comfortable and it carries a lot of useful gear. Conditions can change rapidly in the mountains and it’s necessary to carry several items in case of bad weather or an injury. Starting at the top: 70 oz bladder, knit hat, soft flask, 1st aid kit and antiseptic, long sleeved technical shirt, waterproof jacket, light neck gaiter, gloves. I can also carry hiking poles but the race doesn’t allow them so I haven’t been using them. Not pictured: the phone which took this picture, lots of bars, gels, cheese sticks, and other fuel. 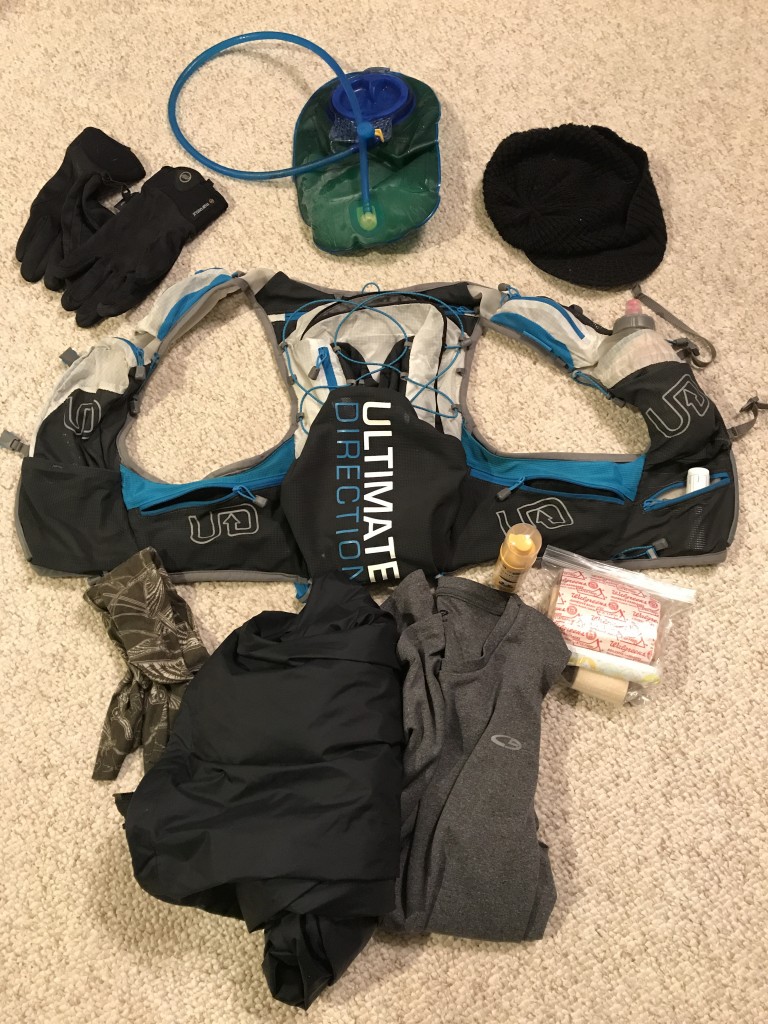 Ultimate Direction PB Adventure Vest plus most of the gear I carry in it.

I am tremendously grateful to be able to train for this event. It’s been a memorable experience. I spent several years in my 20s unable to run due to chronic pain. That’s gone now. I’m very durable and strong. I take more than a little bit of pride in both my willingness to take on this race and my ability to train for it. This undertaking is not in everyone’s wheelhouse. It’s in mine though.