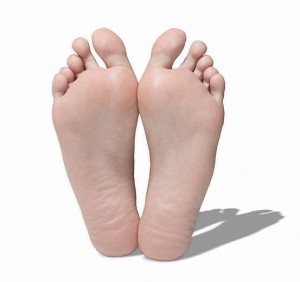 The cutting edge of running technology!

First of all, a disclaimer: I am NOT telling everyone to throw out their running shoes/inserts/orthotics and go barefoot to run all the time forever.  If you’re having success then keep doing what you’re doing.  I do however suggest reconsidering what you think you know about the human foot and the shoes we put on them.  If you’re in pain then you MIGHT consider changing from a highly structured foot environment to something less structured.  Alright, on to the important stuff.

The case against running shoes (or maybe FOR going barefoot from time to time) seems to be mounting. What we’ve got here is more evidence that for running, the human foot all by itself is likely the most highly advanced instrument for the job.

I’ve posted previously on the issue of running and human evolution, and the issue of running shoes vs. barefoot running.  Research continues on the issue.  An article in Science Daily titled Barefoot Running: How Humans Ran Comfortably and Safely Before the Invention of Shoes tells us of research on three groups of people: those who had always run barefoot, those who had always worn shoes, and those who had converted to barefoot running from shod running.  (This analysis of different types of runners is one strong point of the study.) Runners in Kenya and the U.S. were subjects.  The project was a joint effort between Harvard, University of Glasgow, and Moi University.  The full article can be accessed for a fee in the journal Nature.

The researchers observed very different patterns during barefoot running vs. shod running.  Barefoot runners land on the mid-foot or the forefoot whereas running in shoes tends to promote a heel strike.  Barefoot running results in a more spring-like step by utilizing the arch of the foot rather than driving the heel into the ground.

“Our feet were made in part for running,” Daniel Lieberman (researcher) says. But as he and his co-authors write in Nature: “Humans have engaged in endurance running for millions of years, but the modern running shoe was not invented until the 1970s. For most of human evolutionary history, runners were either barefoot or wore minimal footwear such as sandals or moccasins with smaller heels and little cushioning.“

The researchers suggest than in fact barefoot running may be less injurious than running in modern running shoes.  They caution that running barefoot or in minimal footwear must be a gradual process if one has been running in shoes for a long time.  Lieberman delves further into the biomechanics of barefoot running on his web page called (surprise!) Barefoot Running.  I haven’t read this site yet but I’m planning on digging into it ASAP.  Looks very interesting.

From what I’ve learned as a personal trainer I recognize the immense importance of properly functioning feet.  If you take a look at your feet and how much movement is available to those things you may be surprised.  There’s a lot of potential movement there!  Proper foot movement brings on proper knee movement which brings on proper hip movement which makes the trunk and the shoulders move properly.  Liberman observes that humans have been using their feet for far longer than the modern running shoe has been around.  In our modern age we’ve decided that much like our food, we’re going to out think nature and “improve” on something that’s worked well for a very long time.  But what happens when we put our feet in running shoes?  We start to take away movement.  We put a big piece of foam between us and the ground so that we desensitize our feet.  (Compare this to going to a movie in sunglasses or listening to music with earplugs in.)  In other words, we seriously alter something that’s been working pretty well for thousands of years.  This alteration in function is made even more dramatic if we use orthotics.  So it seems entirely likely to me that many cases of knee pain, hip pain, even shoulder and neck pain may well be rooted in what we’ve done to our feet.  At the very least, I think it’s worth examining the issue.  I’ll discuss more on the issues around barefoot vs. shod running in upcoming posts.

5 thoughts on “News on Barefoot Running: Part I”