If you’re like many runners, stretching is your first course of action when you feel pain. Sore Achilles tendon? Stretch the calf. Sore knee? Stretch the quads or the IT band.

The problem is, tight muscles are rarely the root cause of pain, so stretching rarely solves the problem. A better solution for chronic, training-related pains and injuries—one with more evidence behind it—is strength training.

Read the rest of the article, my latest for PodiumRunner.com.

This post is mostly the same as my recent article in CompetitorRunning.com. I discuss several exercises in the article designed to help runners overcome common painful issues related to running. For this post, I include pics and videos of the exercises. Here it is.

Chronic pain is frustrating. Painful feet, ankles, knees, hips, and low-backs are common in runners. Chronic pain may bring fear that you’re broken, weak, and fragile. Thus you avoid many meaningful activities. You may obsess over your pain. This is the fear-avoidance cycle and it fuels itself.

Pain serves a valuable purpose but with chronic pain, the pain remains after it has served its purpose. Chronic pain comes from a “broken pain system,” akin to a car alarm that goes off for no reason. Fortunately, you can overcome chronic pain and start running again.

Pain science reveals several important points regarding chronic pain. Most important is that pain rarely equals harm or damage. You can be hurt and strong at the same time. (You can also have damage with no pain. Ever find a bruise but have no memory of how it got there?) Chronic pain is the result of a sensitized nervous system aka central sensitization (http://www.instituteforchronicpain.org/understanding-chronic-pain/what-is-chronic-pain/central-sensitization). Contributors to sensitization include:

All of the above factors may be kindling for a pain fire. One too many stressors may spark the fire. You feel pain when the accumulation of stress exceeds your brain’s perceived ability to cope. There are two ways to tackle pain. One way is to decrease the stress that contributes to pain. Another way is to increase your resilience and get strong.

You can lower nervous system sensitization in several ways:

Your bones, connective tissue, joints, and muscles are very strong and they respond well to loading. If you’ve been guarding and resting part of your body then it gets weaker. Structures like the Achilles and patellar tendons need strength, not more rest. Physiotherapist, chiropractor and pain expert Greg Lehman favors gradual strengthening as one of the best ways to reduce pain.

Get strong – Load it!

Loading strengthens muscles and connective tissue while and provides an analgesic effect. Physical activity boosts your mood, builds self-efficacy, and shows that you’re not broken. By engaging in exercise you break the fear-avoidance cycle. Here are several exercises to help with several conditions. A comprehensive guide is beyond the scope of this article.

Isometrics work well to calm pain. Contract and hold with no motion for 30-60 seconds. Perform isometrics frequently throughout the day. 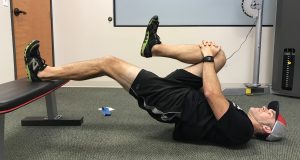 Exercises should be exhausting in 5-10 slow, deliberate reps. (Most of these can also be done as isometrics too.) Start with bodyweight then add weight via barbells, dumbbells, kettlebells, weight vests, machines, or rubber tubing/bands. Persist into pain no higher than a 4 on a 1-10 scale.

Heel raises for Achilles tendonitis can be done with a straight or bent knee.

Side bridges target abs and hip

Band leg press (A squat can be done in a similar way.)

Band leg press (A squat can be done in a similar way.)

Exercise is medicine. If you’ve avoided running for a while then it’s time to run! A little bit of running will help you understand that you’re not broken and the physical activity will help calm your nervous system. You’ll use the process of graded exposure. Add work gradually, keep pain at a minimum, and you’ll increase your capacity for activity.

Perform each workout twice per week on non-consecutive days. Pain should be no higher than a 4 on a 10-scale (1 = no pain, 10 =  very painful) and pain should not alter your running form. Don’t push through severe pain.

It’s not uncommon for pain to flare up after activity. Don’t be alarmed. You haven’t done more damage. You’ve pushed a boundary and your nervous system has overreacted. Reduce your activity level a little bit next time you exercise.

You may need more information beyond this article. A physical therapist or other medical professionals can help guide you through recovery. Injuries such as stress fractures definitely need to be unloaded and rested. If your pain gets worse with activity then seek medical care.

The upside to adversity is that I get to learn something. If that’s true then I am an expert genius on problems with my left foot and lower-leg. I’ve fought various aches and pains in my left foot region and the war continues! I am grateful to be on the very tale end of a successful battle against posterior tibialis tendinopathy (PTT). 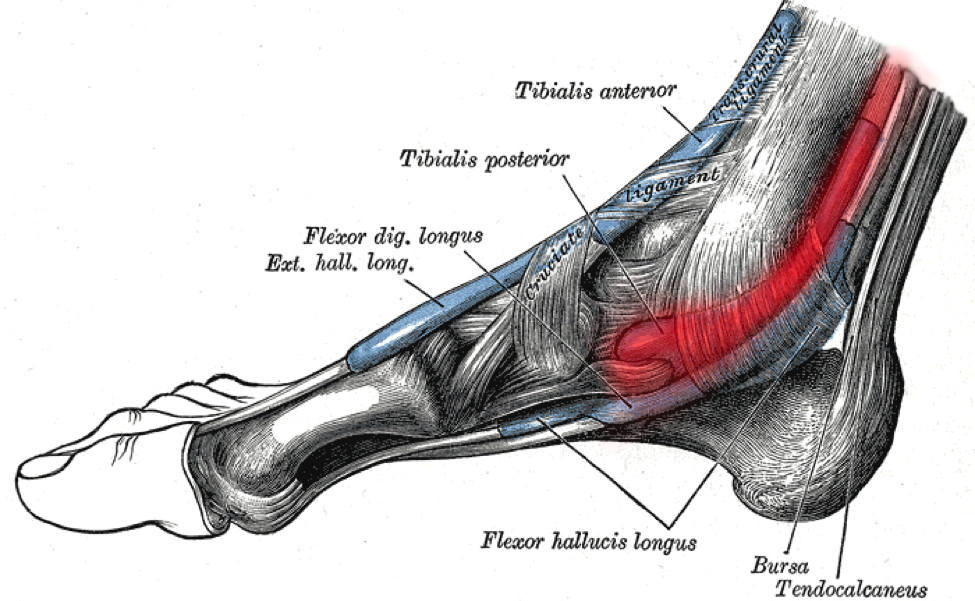 Why does a tendon hurt?

The injury mechanism is that the tissue has been stressed beyond its ability to recovery. Too much stress/too fast/too often is the problem. Thus, the tissue must be unloaded and rested enough that it heals. Tendons, compared to muscle and skin, don’t get much blood flow so they need longer to repair than blood-rich tissue.

I took the whole month of January off. Every runner — probably every athlete or fitness enthusiast in any discipline — shudders at the idea of taking time off, especially a whole month. “I’ll get out of shape!” or “But I have a race in X-number of weeks!” we say. Well, here’s some news for you: If you’re injured then you’re out of shape. Let’s say that together: IF YOU’RE INJURED THEN YOU. ARE. OUT. OF. SHAPE! You’re busted. Broke. Lame. Dead in the water. Out of the race. It’s the agonizing truth.

You get what I’m saying?

If you don’t want to prolong the condition, if you want to get back to serious training (as opposed to piecemeal, sporadic, painful, crappy training) sooner rather than later, then STOP RUNNING RIGHT NOW! Bite the feces-covered bullet and prepare to take several weeks off. This is a test of your discipline. You may think you’re disciplined because you do all this running but discipline isn’t doing what you like to do, discipline is doing what you need to do.

Or, just like me and a bunch of other runners, you can believe you’re the exception, you’re made of magic, you’re different from all the other humans and your PTT will resolve in miraculous fashion. I took a few days off, tried to keep running, and I was still hurt. I did that a couple of times. Reality, in all its brilliant, gruesome glory was sitting on my chest, trying to kill me. But January was a better month to take off than all the other months coming my way and I decided it was time to stop being stupid.

You’re a grownup. You’ll make your own decision but guess what: At some point you’ll stop running. You can either make the choice or it’ll be made for you.

(I’m an expert at dispensing this type of advice but it’s as painful and difficult for me to follow as it is for anyone else. Let me make the dumb mistakes so you don’t have to. Also, for a big pile of woe, read the Let’sRun.com forum on PTT, where you can read about people who’ve dealt with this curse for months and years. My bet is they haven’t taken sufficient time off. But if you read about those who overcame PTT, you’ll see most of them took a significant break from running.)

Fortunately, I could bike and lift. Those aren’t perfect substitutes for running but what is? I was able to keep my body in decent shape. I found peace of mind, and a sense that I wasn’t helpless. The good news is I improved my cycling and my numbers went up on the weights. Hooray me.

Dr. Nick Studholme is always helpful when I’m hurt and can’t figure out why or what to do about it. He showed me how to use Dynamic Tape to help unload the tendon. He also provided me with the following two resources.

Return to Running Rules of Thumb – Are you ready? This contains specific bench marks that you should be able to hit before you return to running. Some of the terminology may not be familiar to you if you don’t have an education in kinesiology. Do your own research, contact me, or contact a physical therapist for help understanding this information. If you pass these tests then you’re ready for…

Zeren PT Return to Running Program. I like the specific, progressive instructions here. Even though I’m a fitness professional, it helps if I get outside guidance and rules to follow. As the saying goes, “The lawyer who represents himself has a fool for a client.” Might as well replace “lawyer” and “represents” with “coach” and “coaches.” If left to my own guidance then I’ll tend to do too much too soon too fast and I’ll get hurt again.

4 Ways to Prevent and Treat Posterior Tibial Tendonitis is from Runnersconnect.net. This is a thorough, well-researched article. In it you’ll find various strategies to address PTT including pictures, exercises, and specific exercise protocols. I used a lot of the information here.

Below is a taping strategy that can help unload the posterior tibialis and support the arch. Dr. Nick Studholme used Dynamic Tape on me. I’ve been taped with KT Tape and Rock Tape before and I can say for certain that Dynamic Tape provides more resistance than either of the other two and it stays on longer. Also, I tried doing it on my own and it doesn’t work. Get a friend to help or have your physiotherapist do it.

In the past, fixing my technique was the key to overcoming a collection of running-related problems and pains. I believe a regression in my technique is what brought on this PTT. I know how to run. I help my clients regain good running form — but I’m not perfect and I can’t watch myself run. My technique slipped and I didn’t know it until I got some expert eyes on the case.

I’m enormously grateful for the help of my new running coach, Andrew Simmons of Lifelong Endurance. Through his guidance I’ve shored up my technique. The first time we met he videoed me running and we saw some faults. I won’t go into the specifics here but he helped me bring awareness to what I was and wasn’t doing correctly and now I’m running better. I believe good technique will help keep my tendons healthy.

If you’re dealing with nagging running injuries then perhaps the way you’re running is the problem. I highly recommend time with a coach. You don’t know what you don’t know. The right coach does know. It’s money and time well spent.

My PTT was similar in some regards to achilles problems I’ve had in the past, but it was different in its tenacity and response to treatment efforts. In the next post I’ll discuss my rigid arch and why I believe it has contributed to my foot problems. I’ll also demonstrate a mobility drill, foam rolling techniques, strength exercises that helped, and some running technique points.